A cardboard desk? I won’t stand for it (actually I will)

Something for the Weekend, Sir? This week, I have been worried about getting it to stand up.

The more I worry, the greater the difficulty in ensuring a sturdy erection that doesn’t immediately flop over.

I hope you understand that this has never happened to me before. Perhaps I could try again in a few minutes?

Ah, there we are. Nice and stiff and thick and smooth. I’ll have no problem staying upright now. Look how neatly it slots in, too.

I am, of course, talking about building office furniture out of cardboard.

Since I last wrote about standing desks – height-enhanced tabletops devised for the health-conscious user who wants to work standing up rather than remaining sedentary – the market has developed quite a bit.

No doubt you remember that I expressed some dissatisfaction with the restricted footprint of cheap standing desk converters while balking at the cost and complexity of dedicated height-adjusting office furniture with electrically powered telescopic legs and whatnot.

I also dismissed floor-standing cardboard furniture as being a little expensive for what it is – namely just crappy cardboard. On the other hand, a flat-packed, self-assembled standing desk that you can pick up by yourself without straining your nuts and shunt around the office or your house to where it’s needed/convenient/least obstructive whenever you want seems too intriguing not to try.

So this week I tried it.

Self-assembly furniture, hmm. Cardboard I could easily tear or bend in the wrong place, yikes. Oh, come on, I’ve assembled flat-pack furniture before. How hard can it be?

To be on the safe side, I picked the toughest looking product I could find in the UK, the £129 Cardboard Standing Desk from aiBox. Lots of width and girth are important, I read somewhere.

As a result, the process of opening the box felt less like I was unpacking a heap of cardboard slats and more like defusing a bomb, with David Hemmings down in the boiler room asking me by walkie-talkie whether to cut the red wire or the white one.

I spent the best part of half an hour just concentrating on not accidentally tearing what might turn out to be a table leg, bending a potential desktop, allowing any young children to dance around shouting “Box! Box!”, or permitting the cat to sit on the detonator in order to lick its own bollocks.

At last, here it is, extracted. 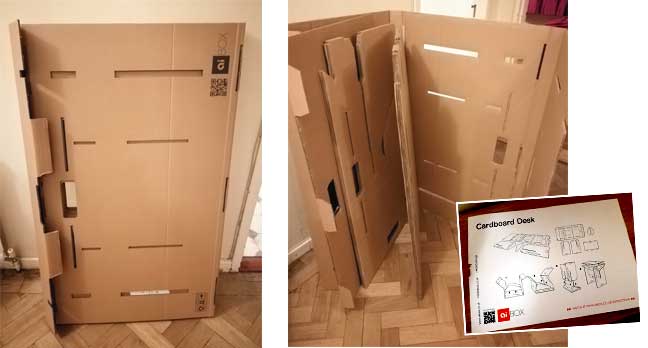 Opened up, the pack appears to contain large pieces of cardboard. So far so good. And to help me achieve my goal of building a standing desk, there are some incomprehensible IKEA-style diagrammatic instructions showing how to assemble the Great Trilithon at Stonehenge from what look like aircraft components. 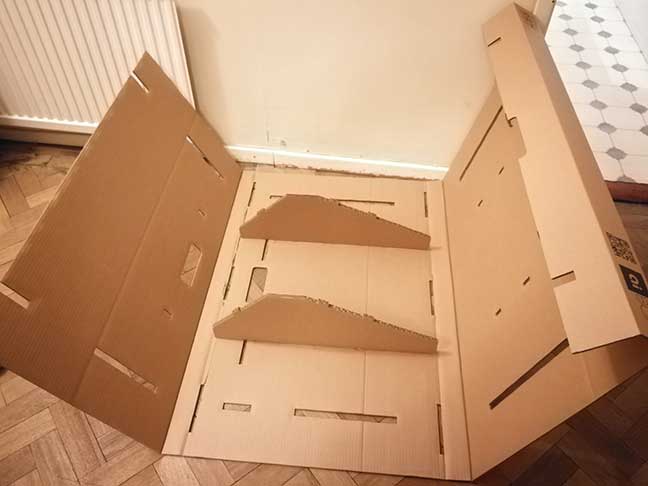 OK, I have got started but I have a terrible feeling that I am slotting random parts into the product packaging. I’d retrieve what I thought was the packaging except for the fact that it got collected by the recycling lorry an hour ago. 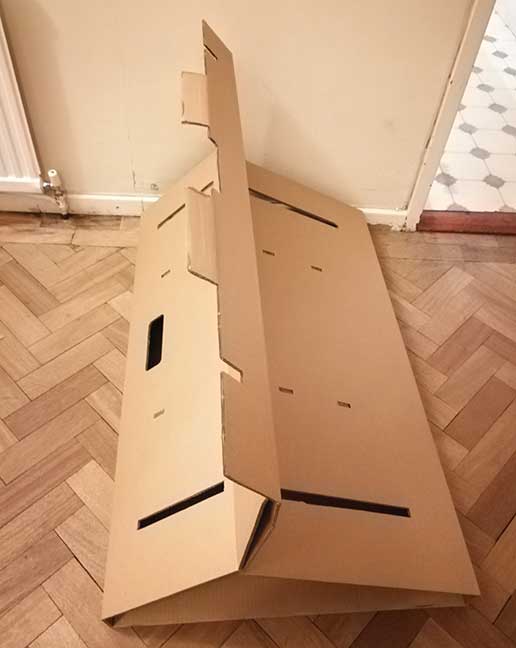 This resembles one of the pictures in the instructions but only because I bent some of the bits the wrong way and added some extra bends to make it so. Is it too late to pop to the DIY shop for a tube of Liquid Nails? 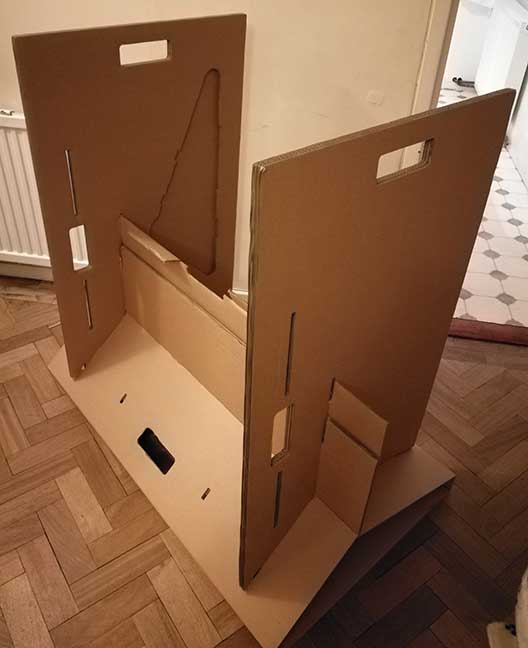 I know it might seem like I am making rapid progress here but to get this far took a fair amount of strength, alignment and Olympic-standard swearing, as every time I pushed one bit in, another popped straight out again. Brute force, precision and copious expletives won the day, however. 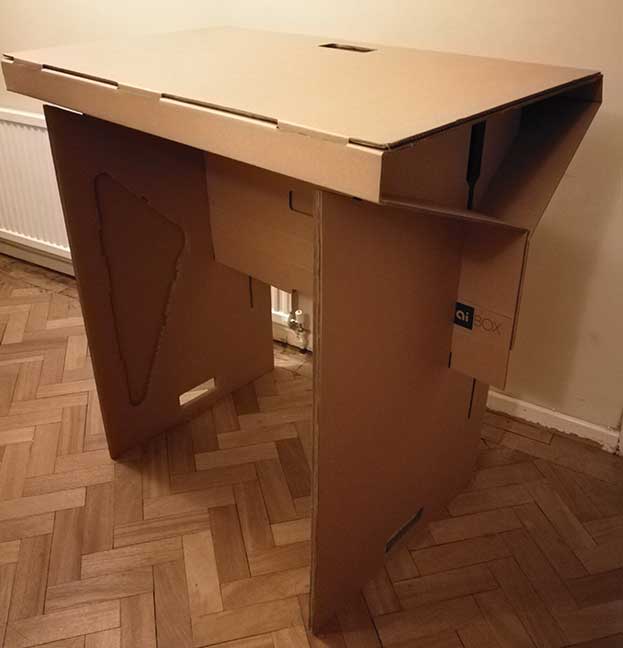 I can pick it up and turn it upside down unaided – which is just as well because I assembled it in the hallway and the family is beginning to complain about not being able to get to the toilet. 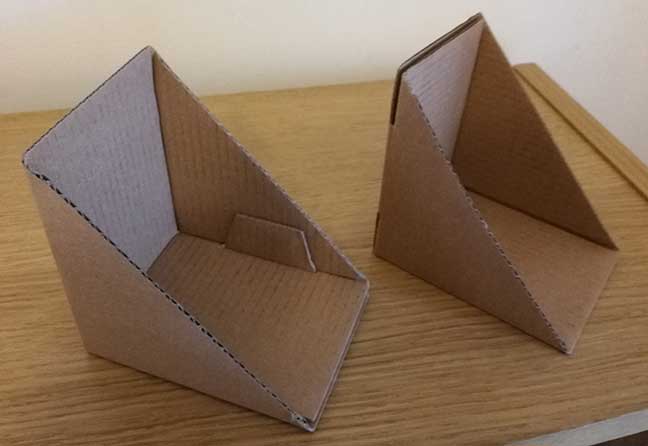 I’m not certain what these leftovers are supposed to be for. But then, what flat-pack furniture doesn’t leave you with an intriguing handful of unused parts?

The standing desk seems taller than I anticipated, partly because I am a short-arse, making me resemble a gnome dancing around the aforementioned Stonehenge. But the height is right if I want to avoid slouching and not so high that it feels akin to standing at a pulpit. 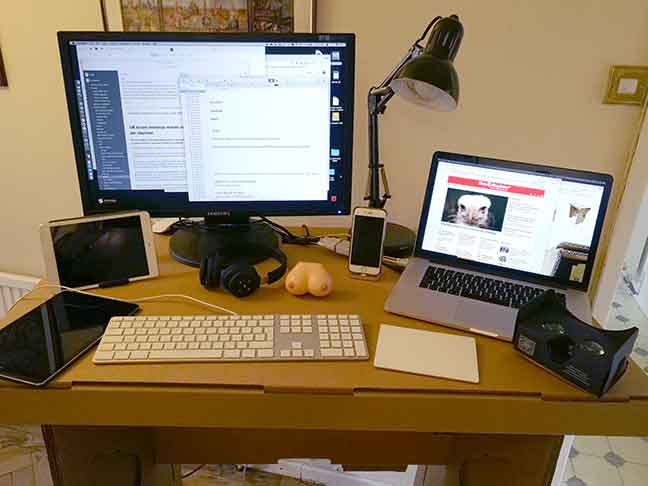 Also, the desktop is a lot wider and deeper than I anticipated but that just means I can put more of my work stuff on it – including other cardboard-themed gadgets such as my Google cardboard (to the right) and flat-pack-themed devices such as my tablets (left), not to mention essential business tools such as my stress-relieving squeezy breasts (centre).

Not so much a pulpit as an altar, then. Since turning vegetarian, I no longer have to worry about goat’s blood soaking into the corrugated parts but I might have to keep on eye on those candles and incense burners.

And while a cardboard standing desk is strong, it won’t take the weight of more than one virgin at a time. Remember, you read it here first.

Unfortunately, I now have a large cardboard desk in my hallway and will probably have to pack it flat again by the end of the day. On the other hand, I could carry it into my home office and disassemble my conventional sit-down desk instead.

It was while I was wobbling between these two possibilities that my mind was suddenly made up. Can you guess why?

AiBox’s cardboard standing desk has now been packed away, awaiting its next ad hoc use and I’m honestly unsure when I’ll next retrieve it from the attic.

Hang on, maybe I could work in the attic. Now there’s an idea, and my gnome-like height is ideal for avoiding the low beams.

All I need now is a cardboard box for storing the virgins.

Alistair Dabbs is a freelance technology tart, juggling IT journalism, editorial training and digital publishing. Next week, he will relate his experience of fixing some guttering above the porch and apply filler to a crack in the wall. Thrilling stuff, we’re sure you will agree. Readers can see more of Dabbsy on video at BTN's weekly Big Show videocast. FBI Update: 18.5kg (slowing down now).