The race is heating up for a wireless virtual reality headset with HTC announcing a $220 add-on to its Vive system that will allow you to unplug from your PC.

The "Tether-less VR upgrade kit" attaches to the existing Vive headset and comprises a wireless transmitter and receiver that sits on top of the head strap and a battery pack that sits at the back of your head.

The company has not released any technical specs for the device but it was been built by TPCAST, will reportedly work for 90 minutes and will ship in the first quarter of 2017 in limited numbers.

The "upgrade" is a sign that HTC is worried about two new headsets also expected to come to market next year: Oculus' Santa Cruz and the new Sulon Q.

HTC and Oculus currently represent the high-end of the VR market, with a standalone headset, rather than a smartphone held in a pair of goggles. The advantage to this comes in both quality and latency - they are not restricted to the processing power and motion tracking contained in a mobile phone.

But, however, both companies launched requiring the headset to be physically connected by a wire to your PC - a situation that lead to immediate and widespread mockery considering this is a product that is supposed to be able to let you physically move around.

The difficulty with creating a wireless headset however comes in the need to share huge amounts of data in real time - the slightest delay in either images or movement tracking can make the experience nauseating for users. It's not clear how HTC has achieved that.

As for the Oculus Santa Cruz: it was demoed last month but is currently only a prototype. It has one distinct advantage over the HTC approach in that it allows for "inside-out" tracking - meaning that the headset itself sensors the room you are in, so you don't have to set up special sensors in the room and calibrate the system before using it. It does appear however that Santa Cruz still relies on connecting wirelessly to an external PC.

The other huge advantage of "inside-out" is that it can offer augmented reality, rather than just virtual reality. In other words, you can be shown the room you are currently standing in on the headset and have virtual reality elements added to it, rather than have a purely computer-created environment. 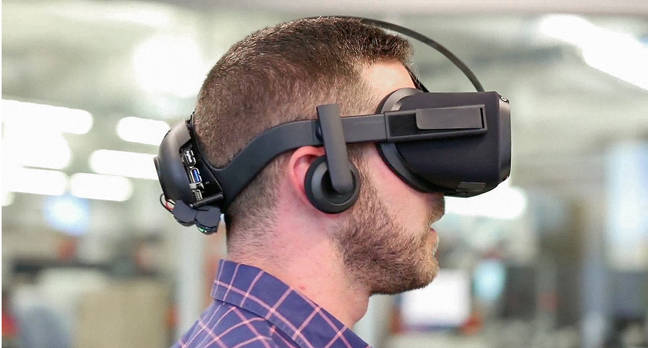 The Oculus Santa Cruz prototype as demoed last month. Better but still not there.

Both of those headsets may be blown out the water however by the as-yet-unreleased Sulon Q.

The company demoed its latest headset last month and told The Register that it intends to launch in early 2017.

The Sulon is later to market than HTC and Oculus largely because it has been perfecting the technology that the other two are now desperately working on: a wireless headset.

The Sulon Q will have inside-out tracking and come without wires. But it will also have two very distinct advantages.

First, it is not relying on an external PC to do the processing and so does not require wireless data flows to function. Instead, Sulon has managed to build an entire Windows 10 PC into the headset.

Second, because it does all the processing on board, and because the company has been working solely on a self-contained headset, it has a battery life that Sulon project manager Kibaya Njenga told us was "equivalent to a laptop". 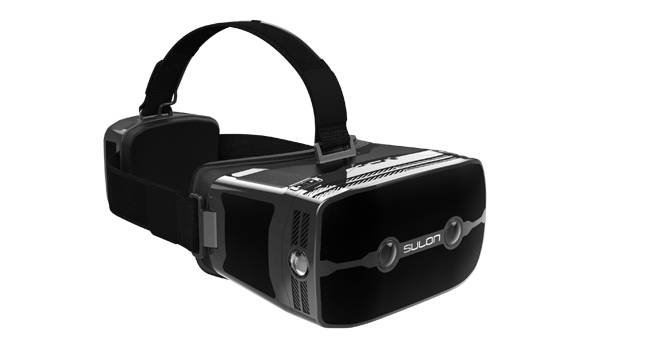 The Sulon Q: ready to steal a march on the market?

He wouldn't go into greater details beyond stating that the more processing the system does, the less time the battery will last, but it's safe to assume that with the Sulon Q, you are looking at several hours before needing to charge - a big improvement on the HTC's 90 minutes.

Another advantage that the Sulon system has over HTC's add-on approach is that it will almost certainly be more comfortable as the headset has been designed as a whole, whereas the HTC wireless pack is an add-on. That add-on will put weight right on the top of your head. We will have to wait and see but we predict that gets pretty uncomfortable after a while.

There are trade-offs with the Sulon Q approach. It can't, for example, match the processing power of the Oculus and HTC models so graphics will be a little less rounded with lower resolution.

That said, we don't know yet whether the other two companies will need to downgrade their image quality a little in order to make their headsets work with wireless data.

The price is also unknown right now, although if you need to buy a new PC or upgrade an old one in order to power the Rift or Vive, it is likely that Sulon's standalone Q will come in cheaper overall, especially when you consider the Vive's new wireless add-in comes with a $220 price tag on top of the Vive's $799.

And then of course there is the ecosystem. Sulon is not providing any information about the user interface that comes with its system, and while it is offering SDKs, it is not going open source. It works on Windows and is making sure that VR content developed using the current leader in VR software, Unity, will work simply and easily with its headset. The Sulon Q will have two USB 3.0 ports and a 2.5mm audio jack - so it is more open than the locked-down and increasingly pricey Oculus Rift.

That's all good but HTC and Oculus have been busy building up lots of original content. Even if Sulon comes out with a headset that is 12 months ahead of the other two, if the games and films aren't there, people will hold back from purchasing it.

In short, everyone in the VR market knows that they need to get away from a wired headset as soon as possible. The two companies out there right now - HTC and Oculus - are working hard and fast on that but are constrained by the fact that their systems run on a separate computer.

Sulon meanwhile is about to launch into the market and has decided to build a standalone device with the PC built into the back of it. It has had to make some trade-offs in order to keep the headset light enough.

And of course, there is also the PlayStation VR which is also wired and which only works with Sony Playstations but comes with a name and content that everyone is already familiar with. Sony has no announced plans for a wireless headset however.

None of the systems are perfect and all are relying on continued advances in technology to get to that next level. As to which company gets there first, with the right product, at the right quality and the right price - that is all wildly up in the air right now. It's a big race with potentially huge rewards. And it starts now. ®