Microsoft leaks Visual Studio for Mac, then scrubs the news

Developers committed to C# have something to look forward to

Microsoft Visual Studio, or something like it, will soon be available for macOS, a shift that reflects the company's effort to be more open toward non-Windows technology.

Microsoft published the announcement prematurely and then withdrew it. The news, captured by archive.org, is scheduled to coincide with Microsoft Connect(); – a developer event scheduled for November 16 and 17 in New York City.

Asked about the snafu, a Microsoft spokesperson in an email said, "Microsoft has nothing further to share at this time."

Visual Studio is Microsoft's integrated development environment (IDE) for creating Windows and web applications. Apple and Google both offer IDEs for their respective platforms, Xcode for iOS/macOS and Android Studio for Android. And the Eclipse Foundation maintains Eclipse, an IDE that's used for Java, Android, and PHP development, among other things.

Visual Studio for Mac is built on the MonoDevelop IDE, the foundation of Xamarin Studio, so it's not quite a macOS port of Visual Studio. Really, it's a different but related product. 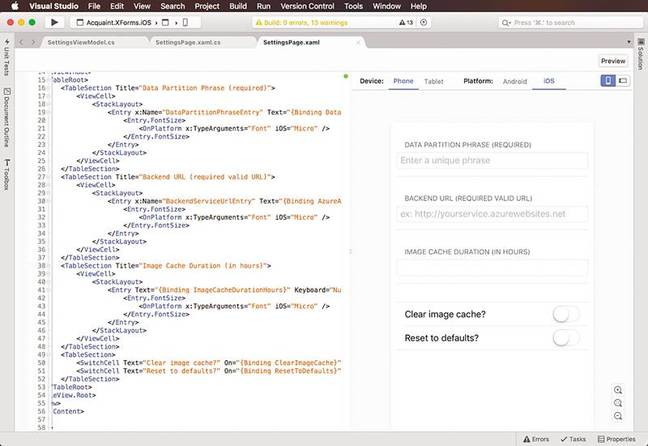 "Although it's a new product and doesn't support all of the Visual Studio project types, for those it does have in common it uses the same MSBuild solution and project format," explained Mikayla Hutchinson, Microsoft senior program manager for the Xamarin Platform, in the withdrawn post. "If you have team members on macOS and Windows, or switch between the two OSes yourself, you can seamlessly share your projects across platforms."

Earlier this year, Microsoft laid the groundwork for stronger relations with mobile developers through its acquisition of Xamarin, cross-platform development software that lets Windows programmers use .Net to write C# applications for Apple's and Google's mobile platforms.

In a similar sort of outreach, Microsoft in April released a lightweight Visual Studio alternative, Visual Studio Code, a source code editor for Linux, Mac, and Windows, after a year in preview.

Android and iOS account for most native mobile development at the moment. By making Visual Studio suitable for Android, iOS, and macOS development via Xamarin – not to mention server development via .NET Core and Azure – Microsoft aims to remain relevant with developers who aren't focused on the Windows ecosystem.

Such openness is in keeping with the corporate mission statement that CEO Satya Nadella sent to Microsoft employees last year. "We need to be open to the ideas of others, where the success of others does not diminish our own," said Nadella.

Along similar lines, it appears to be just a matter of time before Visual Studio fully embraces Linux. In March at its BUILD conference, Microsoft released a Visual Studio extension for writing and building C++ code for Linux servers, desktops and devices. ®