Huawei has a new X6000 model in its FusionServer line of server cartridges stacked inside a rack chassis.

You may not see these much, if at all, in the US, but they will feature in the rest of the world.

Now we also have the new X6000 high-density server and the XH310 V3 server node. It’s a new X6000 because, in 2013, Huawei had a Tecal X6000 High-Density Server using the same form factors. What we have here is a server node processor refresh, DDR4 DIMMs instead of DDR3 ones, plus a local storage refresh with NVMe SSDs replacing some of the previous disk and solid state drive options.

The X6000 chassis is a 2U box containing two rows of two 1U-high/0.5U-wide server cartridges, or two full-width server nodes. The 4-cartridge option means a rack can hold up to 800 half-width servers and 160 processors, assuming 2-socket servers. The box can contain up to 24 2.5-inch NVMe SSDs.

We’re told the system has a cooling architecture that isolates power air ducts from server nodes.

The X6000 can have one pluggable I/O module with up to four PCIe 2.0 x 8 slots for IO expansion. There are two hot-swappable power supply units set up in 1+1 redundancy mode, and four fan modules working in N+1 redundancy mode.

The XH310 V3 server node is designed for web serving applications and features:

Huawei’s datasheet says it consumes less power than a conventional 2-socket rack server with one processor, and an “independent BMC module provides management functions, such as SOL and remote KVM, startup, and shutdown, facilitating operation and maintenance of the XH310 V3.” 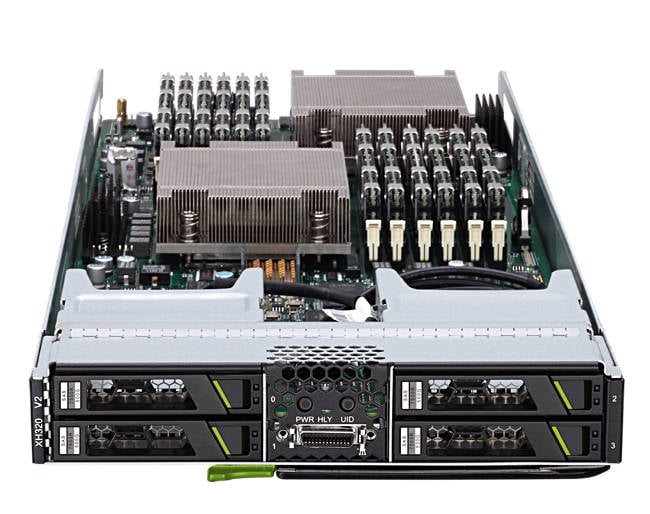