Not the spaceflight programme, the storage hardware

Qumulo says customers can create fine-grained policies and take billions of snapshots with access via NFS and SMB.

Via the analytics customers can get a graphical representation of the file system layout with indicators of throughput and IOPS heat and an at-a-glance view of capacity and activity. There is drill-down access to see which paths and clients are "hot" in realtime to aid troubleshooting of performance issues. 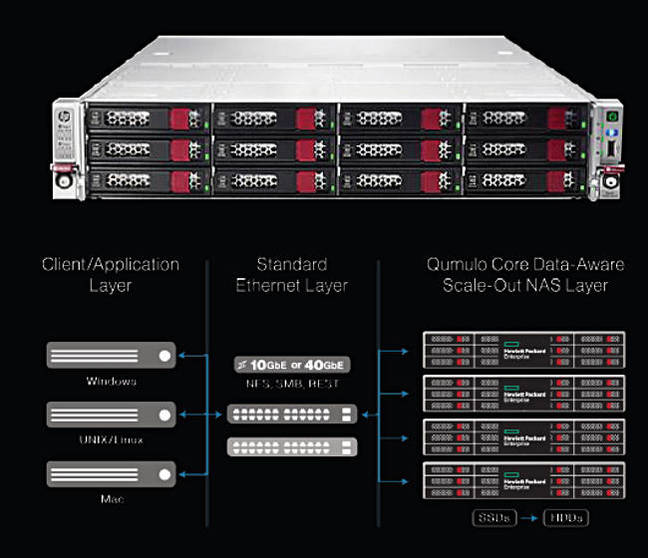 We'll hear about Qumulo Core support of additional HPE hardware configurations in the first half of 2017, and maybe there will be other server vendor partnerships. We can think of Cisco and Lenovo partnerships quite easily. Dell-EMC might be a stretch as that company has its own Isilon scale-out filers, one all-flash, and file services coming to its XtremIO all-flash arrays as well.

Qumulo's Core SW can also run inside a virtual machine or in the public cloud.

The company wants us to know it has more than 100 customers with 60+ PB deployed and zero churn since its March 2015 product launch. Customers' systems range from 96TB to 4PB+ cluster sizes. It also wants us to know its SW is "rock solid" as its agile development methodology has resulted in 24 versions of its software per year, 60-plus versions in total so far.

Each version is subject to over 300 builds, 1,000 code check-ins and five million automated tests. Gee whizzo, Qumulo, that's a heck of a lot of minor releases. And in two weeks time there will be another one. ®