All-flash and hybrid array vendor Tegile has updated its product range, with the T3000 series of all-flash, hybrid and high density arrays becoming the faster and more capavcious T4000 series.

Tegile is battling it out with Nimble and Tintri as one of three relatively recently founded hybrid array startups that moved into all-flash arrays, and now compete with the mainstream array incumbents, as well as Pure Storage and Kaminario.

Here is a Tegile-supplied table showing effective capacities for each new product:

The T4000 products were first mentioned to us back in December last year, with a February 2016 launch suggested. On that basis the products are nine months late. 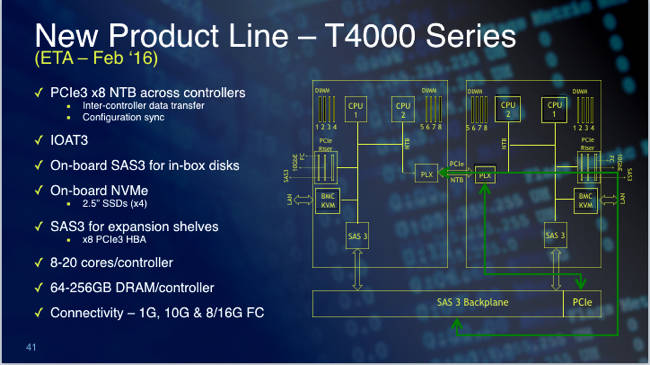 Tegile is not releasing details of T4000 SSD and disk sizes nor controller processor types. It is saying that the new kit has multiple classes of persistent memory as before and the December information encompassed NVMe SSDs. The company says its new arrays "provide 2.3X more memory and 1.7x more IOPS at one millisecond latency to allow enterprises to support applications with high performance requirements."

Customers with Tegile IntelliCare Lifetime Storage receive a technology refresh of their storage system as part of their maintenance contract, and this includes the new T4000 Series, which is available now. ®