Firefox debuted in November 2004 and has sometimes pushed its market share above 30 per cent. These days it's the world's second-most popular browser, with its 13.29 per cent market share according to StatCounter.

Version 50 is a nicety, rather than an auspicious landmark, because the project's initial release schedule saw it progress from version 1.0 to 5.0 over more than six years. At that point, in March 2011, the project swapped to a six-weekly release cycle. We've had 45 versions since.

This time around there's a handful of security fixes, one a critical heap buffer overflow (CVE-2016-5296). There's also “a built-in Emoji set for operating systems without native Emoji fonts (Windows 8.0 and lower and Linux)” and WebM EME Support for Widevine on Windows and Mac. That last addition should mean more video plays without plugins.

There's also a new “Find in page” option that allows users to limit search to whole words only. Which your correspondent reckons will be very handy indeed! 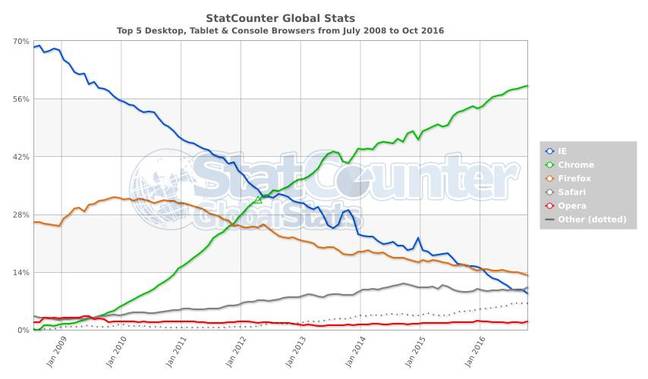 Developers may care to take note of SPDY 3.1's deprecation: it is now disabled by default. Also deprecated is the navigator.battery property, an old battery management API since replaced by a newer alternative that will soon itself be deprecated due to privacy concerns.

The full developer advisory is here. ®

Thunderbird is coming to Android – in K-9 Mail form

For all those worried about the Firefox maker, now you can chip in five or ten bucks a month
Applications24 Mar 2022 | 22