TfL to track Tube users in stations by their MAC addresses 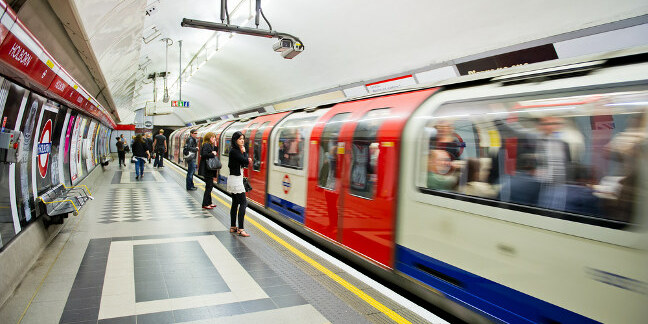 The trial, which will last four weeks from 21 November, “will help give TfL a more accurate understanding of how people move through stations, interchange between services and how crowding develops,” according to the transport authority.

The idea is to develop a more accurate picture of how passengers make interchanges on the Tube network.

Data available to TfL at present only records where people enter the London Underground and where they leave it, meaning figuring out their movements in between those points is a matter of educated guesswork.

“The trial will work by collecting Wi-Fi connection requests from mobile devices as customers pass through stations. When a device has Wi-Fi enabled, it will continually search for a Wi-Fi network by sending out a unique identifier – known as a Media Access Control address – to nearby routers,” TfL stated.

Once TfL has slurped the phones’ and tablets’ MAC addresses, the data is “automatically de-personalised” and sent to their private bit barn for data crunching and analysis.

In addition to tracking people’s movements by analysing where their MAC addresses pop up within the Tube network, TfL also hopes to use this data to get higher prices for advertising spots at busy areas inside Tube stations.

“This short trial will help us understand whether Wi-Fi connection data could help us plan and operate our transport network more effectively for customers. Historically, if we wanted to know how people travelled we would have to rely on paper surveys and manual counting, which is expensive, time consuming and limited in detail and reliability. We hope the results of this trial will enable us to provide customers with even better information for journey planning and avoiding congestion.”

Some months ago TfL carried out a two-day pilot study along the same lines to figure out whether the concept was practical. At the time Virgin Media, which operates the public-facing Wi-Fi network on London Underground stations, said it “doesn’t record any data on usage of the service and doesn’t track individual devices movement across any of Transport for London’s networks including London Underground.”

For the privacy-conscious Londoner, the easiest way to not be tracked is to switch off your Wi-Fi. ®

Feature Get a proper closeup look at an underground rail tunnel? Yes please

'Is this Microsoft trying to be cool? Want to go to the Apple Store?' We checked out London's new retail extravaganza

UK.gov: New London courthouse will focus on crimes of a cyber nature

Not just another generic court building. Oh no