The Mad Hatter of Linux is getting Alice in Wonderland style physical space virtualisation with thin provisioning, compression and deduplication courtesy of Permabit.

Building on its June 2016 Linux availability announcement, Permabit and Red Hat have a go-to-market partnership based on the former's Albireo deduplication and HIOPS compression technology being added as a kernel module to Red Hat Linux. Up until now dedupe and compression have largely been storage array features, and then appearing in software-only storage running on servers and direct-attached disks, SSDs or JBODs.

Against that background Permabit has had somewhat limited success as a supplier to OEMs of its Virtual Data Optimizer (VDO) dedupe and compression technology, potential customers largely preferring to build their own dedupe tech. Its most prominent OEM is probably HDS for file storage, via its BlueArc acquisition. Now that RHEL, via Permabit’s VDO, has its own kernel-level dedupe and compression that means any attached storage can get the benefit of it.

Permabit CEO Tom Cook is especially keen on the COLO angle here. Take a cloud service provider or general colocation operator fitting up their facility with racks of Linux-running servers and storage trays. If they can somehow reduce their storage capacity by, say 25 per cent for a year, and then 25 per cent for the next year and so on, then that removes a significant slug of cost from their annual budgets; that's the way Cook sees it and he has spreadsheet models and charts to backup his case.

Here’s a chart for a Linux Ceph storage setup, assuming a 2.5:1 data reduction rate and suggesting savings of $370,000 over 5 years with Permabit data reduction installed: 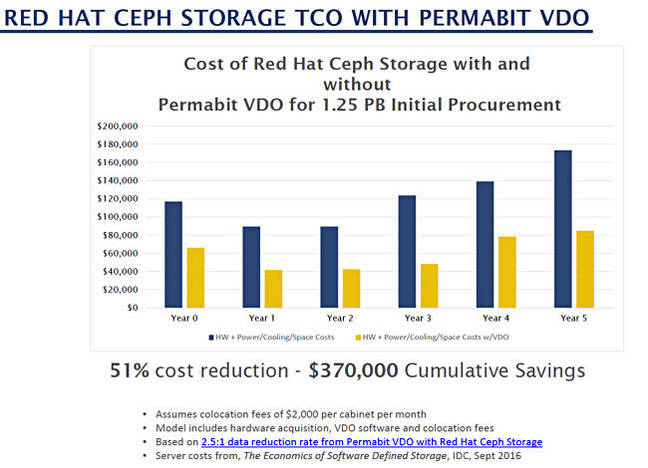 Permabit’s VDO runs anywhere RHEL runs – in physical servers, in virtual ones and in the public cloud – and enables Red Hat to compete against suppliers of deduping server operating systems, virtual server/storage systems, OpenStack and deduping storage arrays, according to Permabit. It typically provides 2.5:1 data reduction for unstructured data and up to 10:1 reduction for VM images.

VDO works with Ceph and Gluster and it’s payable via a subscription license starting at $199/year for 16TB. It’s available through Permabit resellers and system integrators. ®