One foot is out the door for this Apple customer

Analysis For the past few weeks, this tech reporter has been tussling with a complex issue: which new laptop to buy.

Just a month ago, this seemed like an exciting proposition: not only was Apple going to update its MacBook Pro line (at last), but Microsoft had gone all Apple on us and come out with some genuinely innovative products. It was the perfect time to upgrade.

And yet, at the end of a lot of consideration, the decision made was to not go for the new stuff but plumb for the lower-power, older, and definitely no-longer sexy MacBook Air, a clean copy of which will be available to pick up next week.

For some time Apple has been criticized – somewhat smugly – as having lost its innovative edge. But this Air purchase is, ironically, evidence that it is true and that too many years going in the wrong direction (or having no real direction) is starting to come back to bite the fruity one.

The Air laptop is a stopgap. A very expensive stopgap but a stopgap nonetheless. This loyal Apple customer has one foot out the door and when he goes, a slew of other purchases from media players to software to streaming music services will go with him.

Even the iPhone, sat gleaming in all its blackness, is ready for the chop. It's a 6. Didn't get the 6S; didn't want the incremental 7. If the 7S doesn't do something spectacular, then it's the Samsung Galaxy 8 or the Google Pixel.

But back to the laptop. This article is currently being written on a MacBook Pro, 15-inch, mid-2009 model. Yes, you read that right, mid-2009. But much like Trigger's Broom, it has had some modifications: new memory (now maxed out at 8GB); a new 750GB hard drive; and a new battery.

With these additions, the computer has handled an enormous workload every day for years. It was only in the past few months that it finally started giving up: occasional crashes; the odd failing to start up properly. Even then, it was only when several keys stopped working and an Apple Genius told me how much the company would charge for a new keyboard that it became apparent it was time to retire this old workhorse.

And so the full, absolute intent from that point was to get a new MacBook Pro. Maybe the 13-inch instead of the 15-inch. Improved screen resolution and the fact that the smaller version can probably handle the Photoshop use and occasional video editing were the two big factors. It would be nice not to lug around a 15-inch laptop.

And then Microsoft came out with its new Surface. The Surface Book looked exactly right. Powerful yet portable and with a detachable tablet. Perfect. Not only does it offer touch-screen tech – which is often incredibly useful – but it would act as a replacement for the aging iPad which now only really serves a couch-movie machine.

But wait. Apple is refreshing the MacBook Pro line. It won't actually say it is, of course. Rumors were that it would do so at its big September event; rumors that my old friend Alan was obnoxiously Apple about. It didn't do it. But then rumors started up again immediately after (Alan again refused to comment). So I held out. And then they launched...

...with the same spec as before and the Touch Bar. Even as the Touch Bar was being launched, the scene looked like a hilarious Apple spoof. A thin touchable strip across the top of the laptop? That's what you came up with after two years? An easier way to add f**king emojis?

The strip looked kinda useful, but fiddly for Photoshop. But when the launch showed a DJ cramming his fingers into a tiny space above the numbers to mix a dance track, I couldn't help but imagine a scene where Steve Jobs came back to life with a big smile on his face, waited for the awfulness to end, and then tore a new one in every executive that had green-lighted this transparently awful idea.

In five minutes, Apple went from cool to trying-too-hard Hip Dad. Even the DJ (Karim Morsy) was in his 30s. And as the all-white, near-retirement Apple execs tried to persuade the room that he had "killed it" with his music demo, the beautiful dream of a super shiny MacBook Pro to last the next seven years took a last, shallow breath, lay down, and died. 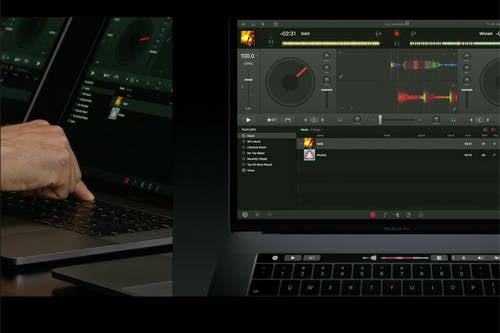 One-finger DJing: so cooooool. And practical. This is really going to catch on with the kids

And, it is good. Really good in fact. But it has several factors that prevented an immediate purchase: the screen removal is a little clunky. It works fine but it's a little clunky. And when testing it by running multiple applications and then editing a picture in Photoshop, there was a small lag in the touchscreen which was... disconcerting.

And so I head over to Apple's shiny new store on Union Square. Where they don't actually have any of the new MacBook Pros. Instead they have two models propped up on pedestals, surrounding by glass and with two security guards hovering by them.

At this point, it dawned on me that Apple may have completely lost its mind. And that was before considering the fact that it only has USB-C ports. Get your dongles here! Three for the price of four!

I specced out the 13-inch MacBook Pro and the price was $2,900. Still $400 less than the Surface – reduced by $300 if I traded in my old laptop (Microsoft is very keen to get people like me to jump ship). But that was still a lot of money for something that doesn't have next-level performance.

There is no way that this new Pro is going to last seven years – for the simple reason that Apple doesn't want it to. The mid-2009 Pro was basically the last Apple laptop that let you do all the things that kept it running: new memory, hard drive, battery etc. From that point, Apple started locking the laptop down.

With this new MacBook Pro, there is literally nothing you can change. You can't even change the memory. If you buy it with 8GB, that's it for you. No upgrade possible. And forget about beefing it up to 32GB in two years' time.

And so with my trusty old laptop hanging on for dear life, this reporter went back and forth between the Surface Book and the MacBook Pro trying to figure out which offered the least-worst option.

And the answer was simple: wait.

Not wait to get a new laptop – I have to have one of those. But wait out the high-end. Microsoft has made a bold push with its machines, offering touchscreens and new pens and the new roundy-turny thing.

It has also embraced 3D and VR in a way that Apple should have been all over last year. All the VR gear is running on Windows 10. And Microsoft wiped the floor with Apple in its 3D demo and new interfaces.

If Microsoft keeps it up, tightens it up and gets that price down, it is going to get the next 7-10 years of business from this individual. Apple meanwhile has two years tops to pull itself out of its rut and get innovating. If the next launch doesn't have a mind-blowing spec and some serious 3D and VR capabilities, and if that Touch Bar doesn't become a Touch Pad or a touchscreen, I'm out.

And out means no new AppleTV (the Roku is still better), no Apple HomeKit (Nest is killing it), no Apple iPad, and, yes, no Apple iPhone.

What will be there is the $1,500 MacBook Air. It's a fabulously light, well-powered, well-specced laptop with the ports I need, that can do 85 per cent of what I need. And it is half the price. It is a symbol of Apple Past, when all the hype around product launches was real rather than a sad rendition of lost glory days.

In the meantime, this workhorse is going to be taken off day-to-day duty and will be fired up only for video editing. If it dies next week, it will probably be replaced by an iMac 27-inch which, combined with the Air, will still cost the same as the new Pro.

Apple still got the sale. But it has lost the loyalty. When the next purchase comes around, it will be a pure play with everything on the table. And even though this is the tale of a single person, I am willing to bet that the same process is going on right now with millions of customers across the globe. ®

It's now officially the WhackBook Pro: If the keyboards weren't bad enough, now MacBook Pro batts are a fire risk

Stuffing your MacBook Pro in a ziplock bag before a flight ain't gonna cut it, say Feds