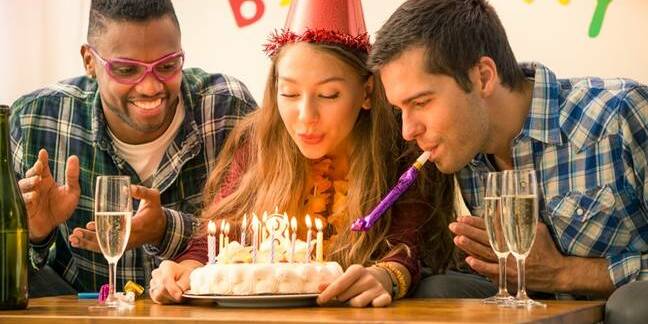 On Sunday, the International Space Station turned 18, a birthday many non-US teenagers around the world celebrate with a drunken binge and a colossal hangover. Instead, the station celebrated with a new arrival and by firing up an unusual birthday candle.

On November 20, 1998 the very first module of the ISS, renamed Zarya instead of the Functional Cargo Block, blasted into orbit from Russia, followed by a second module two weeks later. It wasn't until November 2, 2000 that humans moved on board – and have never left since – but NASA counts its birthday from the Zarya launch.

Not that there were too many celebrations anyway, since the crew were fully occupied welcoming aboard three new replacement crew. French astronaut Thomas Pesquet, NASA's Peggy Whitson, and Roscosmos cosmonaut Oleg Novitsky arrived after a two-day flight from Earth.

It's Whitson's third trip to the ISS in the last 14 years, and she is now officially its oldest resident at age 56. After her six-month sojourn on the station, Whitson will become NASA's most experienced astronaut, with more than 540 days in space over her lifetime.

After the arrival, the ISS astronauts supervised the departure of a Cygnus cargo module, packed full of trash and one unusual experiment. Once the module has been pushed out to a safe distance from the ISS, the second Spacecraft Fire Experiment (Saffire-II) will begin within the capsule.

NASA is very concerned about how to control fires in outer space but isn't going to risk the multi-billion dollar space platform trying to find out. Instead it'll set fire to a 16 x 37-inch piece of SIBAL (Solid Inflammability Boundary at Low Speed) cloth, which is a blend of fiberglass and cotton, to judge how it burns and what can be done to extinguish it.

The Saffire experiments are gradually going to be scaled up to include different types of fire suppression, smoke clearance, and air purification after an accidental ignition. Such knowledge is going to be vital for a safe flight to Mars and beyond.

After the experiment is completed, and the data relayed to Earth, the doomed Cygnus will take its last flight into the atmosphere and is expected to distribute itself across a few grid coordinates of the southern Pacific Ocean. ®

Brewing in spaaaaace: SpaceX sends a malting kit to the International Space Station

Round Up Plus: Commercial crew news and NASA publishes what ISRO won't