Settling on Mars may not be as difficult as first feared. NASA scientists have discovered a huge deposit of water ice just under the surface of the Red Planet.

The ice has been found in the Utopia Planitia region of the planet, a large depression in the northern hemisphere formed by a massive impact early in the planet's history. The ice patch, which is about the size of New Mexico, contains enough water to fill Lake Superior, according to measurements taken by the Mars Reconnaissance Orbiter (MRO).

"This deposit is probably more accessible than most water ice on Mars, because it is at a relatively low latitude and it lies in a flat, smooth area where landing a spacecraft would be easier than at some of the other areas with buried ice," Jack Holt of the University of Texas, coauthor of the Utopia paper published in the journal Geophysical Research Letters, said today.

The MRO carries the Shallow Radar (SHARAD) instrument, designed for just this kind of a job, and after 600 passes over the site it has found ice between 260 feet (80 metres) and 560 feet (170 metres) thick. It's not pure ice, but about 50 to 85 per cent water, mixed with dust or larger rocky particles. 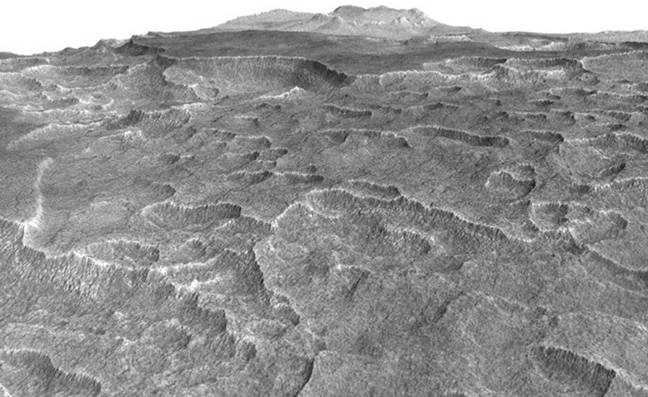 "This deposit probably formed as snowfall accumulating into an ice sheet mixed with dust during a period in Mars history when the planet's axis was more tilted than it is today," said Cassie Stuurman of the Institute for Geophysics at the University of Texas, Austin, lead author of the paper.

Liquid water quickly evaporates on the surface of Mars, but the deposit is protected by a layer of soil between 3 to 33 feet (1 to 10 metres) thick. That's shallow enough to allow for easy mining by prospectors, but astroboffins say the ice would have other uses.

"The ice deposits in Utopia Planitia aren't just an exploration resource, they're also one of the most accessible climate change records on Mars," Joe Levy of the University of Texas.

"We don't understand fully why ice has built up in some areas of the Martian surface and not in others. Sampling and using this ice with a future mission could help keep astronauts alive, while also helping them unlock the secrets of Martian ice ages." ®