Technology and tinkles should not ever be mixed

RotM Dear reader, I am in a state of shock and horror. That’s right - I have attempted to use a Japanese electric toilet in the manner for which it was designed. I fear my rear may never recover.

Your correspondent is currently in Tokyo for Huawei’s Mobile Broadband Forum 2016 and is staying in an excellent, if, for the purposes of this tale, nameless hotel. Amongst its many features is a smart toilet; that is, one of these peculiarly Japanese devices that washes and dries you after the main event.

On first sight, the Panasonic smart toilet installed here is a normal porcelain throne, presented in a fetching shade of beige. Apart from being slightly larger than the standard British crapper, it's otherwise all but identical.

Upon adopting the conventional position, I found the electronic control panel on a sort of armrest-type affair to my right.

Here I encountered the first of many problems. The labels were entirely in Japanese. 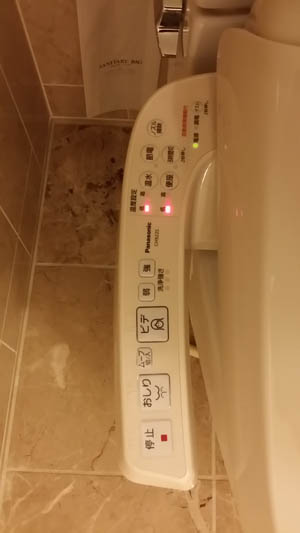 The shower on bum thing logo seemed obvious... but all was not as it immediately seemed (click to enlarge)

Not to worry, thought I. After taking post, I saw the two identical sensors were already lit up and the large square to the left was also lit. The seat appeared to be heated; not strictly necessary in the carefully air-conditioned 22˚C of the room, but a nice touch nonetheless.

Having established this, I then tried pressing the button labelled with the little graphic of two buttocks with a sprinkler lightly playing upon them.

Without warning this caused a jet of hot water to shoot, well, directly up the old cigar clipper.

As you can imagine, dear reader, this caused me some considerable consternation, and while trying to establish my feelings towards this entirely unexpected sensation I leapt to my feet, whereupon the hot jet blast began playing on certain parts which I can only hope did not feature in Mr Panasonic’s original vision of a world-leading industrial and consumer technology conglomerate.

Thinking quickly, as one does in these sorts of situations, I immediately braced myself and sat back down, stabbing at the “gentle sprinkle” button to stop the powerwash function.

This had no effect whatsoever. I tried pressing the other buttons, cautiously at first. I succeeded only in turning up the seat heating, which, oddly, seemed to be split into left and right. Now fearing the slow (and differential) toasting of my posterior as well as the simmering of my nether regions, I began pressing all the other buttons - except for the one with a graphic of a human face.

No matter what horrors befell me in there, I was not going to risk summoning room service to bear witness to this Dante-esque scene.

Somehow, and I still don’t know how, I managed to shut the infernal machine off. Taking a few moments to fall to my knees and weep in gratitude to whichever technological gods had smiled upon me at that moment, I tried pressing the button which I thought had made the bad things stop, in the vague hope it might have been a power button.

The Demon Hell Bog did not come back on.

This was not a relief. Mr Panasonic’s Magical Electric Arse-Washing Khazi probably cost more than my entire annual salary. Not only had I possibly deprived the entire hotel of hot water while trying to stop it giving me an unwanted enema (the hot jet blast turned to cold towards the end, and you can imagine the effect that had) but I might have killed it into the bargain.

At this stage I resolved to admit defeat, give thanks for the continued existence of Armitage Shanks, hope whoever had programmed the Smart Toilet of Doom had inserted a smart reboot function - and look for the conventional toilets down the corridor. ®

The damned contraption doesn’t have an air dryer, I later discovered, so using it in the fully intended manner leaves you with a wet backside.

Dear Japanese readers - there probably was a dryer and it is probably more sanitary etcetera, etcetera. You can explain how our man ballsed it up in the comments below...