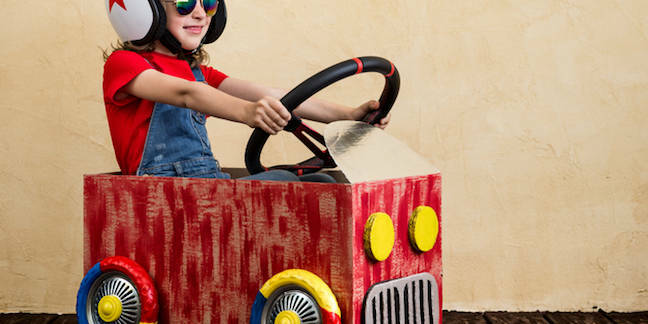 Police in Ontario, Canada, got a shock on Saturday night when they pulled over a speeding driver and found an 11-year-old child hopped up on video games behind the wheel.

Officers were called when motorists reported a car driving erratically north of Toronto on Highway 400 at around 11pm. The vehicle was spotted driving north, then pulled off the highway and headed back south again when the cops decided to intervene.

"Drivers called it in thinking it was probably an impaired driver, because the vehicle was all over the highway," Sergeant Kerry Schmidt of the Ontario Provincial Police's Highway Safety Division told CTV News.

"The vehicle was first ... going under the speed limit – like about half the speed limit," Schmidt said. "As the officer tried to get out and talk to this driver, find out what was going on ... the vehicle took off again."

The car's driver rocketed away at speeds of 120kph (75mph), leaving the police in his dust. The officer gave chase, and with the help of a second car managed to block the speeder in and bring all the vehicles to a halt. Inside they found an overenthusiastic child behind the wheel.

"[He] had just been finishing playing Grand Theft Auto at home and wanted to find out what it was like driving a car," Schmidt said. He had apparently waited until his family was asleep before hijacking the vehicle and going off for a joyride.

In some more panicky places (we're looking at you, America) there might have been an officer-related shooting followed by a full-on moral panic about the evil influence of violent video games on impressionable young minds.

Thankfully Canada is a more civilized place, and after being arrested, the tiny tearaway was told not to do it again and was driven home to face the music from his parents rather than being formally charged. The car was also towed back home.

11 year old boy returned to parents after failing to stop for police on Hwy400...
Wanted to drive after playing #GrandTheftAuto

"He's only eleven years old," Schmidt said. "We're leaving it up to the parents to determine what an appropriate punishment would be. Fortunately no one was killed – in real life, there's no reset button." ®

Deadly 737 Max jets no longer a Boeing concern – for now: Production suspended after biz runs out of parking space

That kill-everyone-onboard flaw that was supposed to be fixed by now? Yep, still an issue