Then cruelly cooks him in Mexican-inspired dish

Pic It was just an ordinary evening for Janet Ayers in Portsmouth, preparing a vegetarian chilli for dinner.

Ingredients included a trio of peppers – red, green and yellow – from Waitrose.

So imagine Janet’s horror on slicing the red Capsicum to find the twisted and toothy mug of US president elect Donald Trump screaming at her. Incarnate.

“It was going into a vegetarian chilli,” Ayers informed The Reg.

“A discussion about Trump and the state of the world was going on while the veg was being sliced up. It was as if the pepper was mirroring the conversation.”

Janet’s response? Naturally: shock. Repulsion. Then a quick photo that she posted to Facebook.

It was a cursed and portentous Waitrose trip.

The green pepper contained, no, not the representation of Trump’s BFF Nigel Farage, but another pepper growing inside it.

It might seem these peppers were the result of some botched secret government experiment or the result of prolonged exposure to radiation. 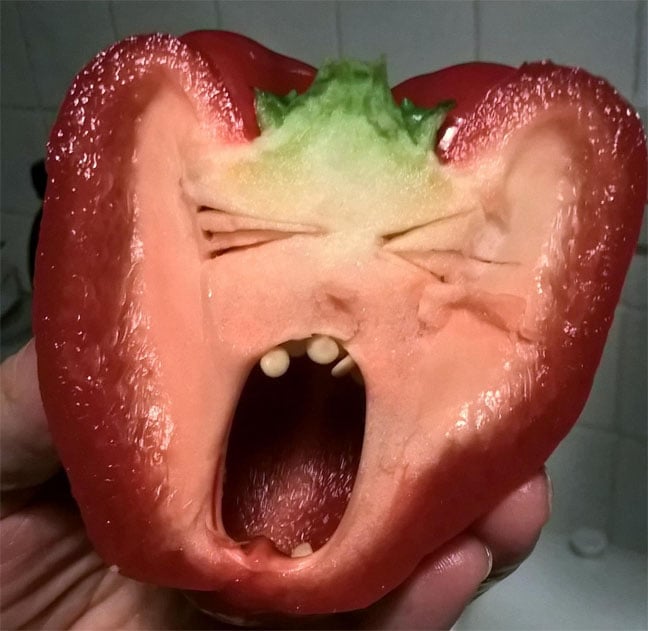 Add your caption in the comments below... (Photo © Janet Ayers, used with permission)

But, no, this is not the first time foodstuffs have borne the claimed representations of the great and good – mostly the revered.

Jesus and the Virgin Mary have a predilection for appearing on toast, cheese and in fruit. Other religious symbols have shown up in fruit and animal markings.

Even The Reg’s famous vulture was emulated by a humble crisp in 2005.

US woman Diana Duyser cashed in on reverence for her Biblical food in 2004, auctioning off a 10-year-old cheese sandwich bearing a face claimed to be that of the Virgin Mary – although film buffs might spot Marlene Deitrich – for £28,000 on eBay.

Not that Janet sought to follow Duyser’s example: the pepper was duly sliced, diced, cooked and served. A fitting revenge, to be served in a Mexican dish.

“We then continued to chop up the pepper. It went into the chilli with all the other ingredients. We ate it for dinner and suffered no ill effects from the Trump pepper.

“We are trying to carry on our lives as normal, after the incident, but may approach the next pepper with caution,” Janet told us. ®

Our thanks to Reg reader Mike Smith for the tip.

A real go-GETTR: Former Trump aide tries to batter Twitter by ripping off its UI

Analysis TL;DR: Trump is confusing everything to stay in the spotlight
SaaS21 Sep 2020 | 35

Facebook Oversight Board upholds decision to ban Trump, asks FB to look at own 'potential contribution' to 'narrative of electoral fraud'

Looks like you can safely ignore that friend request... forever
Legal5 May 2021 | 32

Social network Parler dumped by AWS, says it prepared for this by only using bare metal