No more search boxes, no work benefits, and your social value will be your data trail 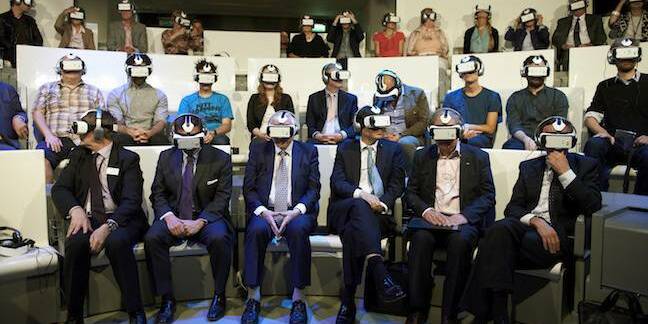 Search as people presently know it – a dialog box for typed queries – will vanish in a decade, according to Susan Dumais, distinguished scientist and deputy managing director of Microsoft Research Lab.

Dumais is one of 17 Microsoft researchers who, in a blog post on Monday, offered predictions about technology developments we should expect next year and a decade hence.

Microsoft's group of futurists is exclusively female, which represents an effort to counter the underrepresentation of women in computing fields, according to the company.

By 2027, the search box will disappear, Dumais insists. "It will be replaced by search functionality that is more ubiquitous, embedded and contextually sensitive. We are seeing the beginnings of this transformation with spoken queries, especially in mobile and smart home settings."

But don't write off Google, or Bing for that matter, prematurely. Search queries in ten years will incorporate sound and images and will include contextual information like location and activities, Dumais suggests.

The Register expects that in open offices, in public, and in multiperson households, people will continue to type their queries rather than broadcasting their interest in embarrassing medications or otherwise sensitive search terms to those within earshot.

Jennifer Chayes, distinguished scientist and managing director for Microsoft's New England and New York City research labs, foresees advances in dealing with algorithmic discrimination. "One of the great algorithmic advances of the next decade will be the development of algorithms which are fair, accountable, and much more robust to manipulation," she said.

Given the current political climate and recorded human history, however, it seems likely that those in power will find ways to bend even the most fair and balanced algorithms to their desired ends.

"By 2027 we will have ubiquitous virtual reality systems that will provide such rich multisensorial experiences that will be capable of producing hallucinations which blend or alter perceived reality," Franco said.

Among the half of American workers making $30,000 or less annually, those interested in hallucinations will probably favor head shops over headsets.

Mary L Gray, senior researcher at Microsoft Research, a Fellow at Harvard University’s Berkman Klein Center for Internet and Society, and associate professor at Indiana University, sees about 30 per cent of US adults doing some form of gig work tied to AI-driven goods or services by 2027. Because consumers may not understand that people play a part in these businesses, she sees social science playing a role to develop technologies and public policy to provide necessary benefits for these gig workers.

That future is already here. According to the US Bureau of Labor Statistics, 53 million Americans – 1 in 3 workers – earn income from the freelance or gig economy. AI may not play a role in much of gig work presently, but doubtless its role will become more prominent. Regardless, the more salient question is why full-time employment is declining and whether it must be so.

Nicole Immorlica, senior researcher at Microsoft's New England research lab, describes a world in which a person's value is measured by Facebook interaction and location data trails: "By 2027, automation will give rise to a new economy in which most people's societal contribution comes from the data they generate as they go about their lives rather than the work they do," she predicts.

"Economists will be talking about ways to fairly compensate people for these contributions. This will most probably involve heavier redistribution of wealth through mechanisms such as taxes or social programs."

But social data-based businesses only work because people are not fairly compensated for their contributions. If Google or Facebook paid people for the true value of their digital work – creating web links as votes for site relevance or sharing and commenting on content made by others – neither company would have become a profitable business.

Olya Ohrimenko, a researcher with Microsoft Research in Cambridge and Microsoft Fellow at Cambridge University's Darwin College, sees privacy improvements by 2027. "Advances in hardware and cryptography will lift data privacy guarantees to a new level: Only an encrypted form of our personal data will be used in medical and administrative analyses, machine learning algorithms and our daily online activities," she contends.

Try to imagine this after reading Bloomberg's account of how federal law enforcement and intelligence agencies are expected to gain broader surveillance powers next year.

Various other Microsoft researchers offer anodyne forecasts of a future made better by technology. We hope things turn out so well. But don't count on it.

Consider these optimistic but incorrect predictions about the year 2000 from science fiction writer Robert Heinlein, from the February, 1952 edition of science fiction magazine Galaxy.

"Interplanetary travel is waiting at your front door – C.O.D. It's yours when you pay for it."

It's yours if your name was Dennis Tito and you paid $20 million for a ride into space in 2001. It's 2016 and Virgin Galactic has yet to make a commercial flight.

"It is utterly impossible that the United States will start a 'preventive war.'"

Yet, the US invaded Iraq in 2003, ostensibly to prevent the use of weapons of mass destruction.

"In fifteen years the housing shortage will be solved by a 'breakthrough' into new technologies which will make every house now standing as obsolete as privies."

San Francisco's housing shorting hasn't been alleviated by new technology. Rather, the pursuit of breakthrough technology, having drawn more people to the Bay Area than the region can accommodate, in conjunction with resistance to development, has caused a housing shortage.

Heinlein also got some things right or nearly: "Your personal telephone will be small enough to carry in your handbag. Your house telephone will record messages, answer simple inquiries, and transmit vision."

Xiaoyan Sun, a scientist with Microsoft Research Asia, anticipates that computer vision, coupled with machine learning, will become ubiquitous by 2027. "Advances in these techniques will lead to ubiquitous vision 'eyes' that can 'see' and empower humans in daily life and all kinds of professions, from manufacturing and healthcare to finance and security," she said.

At least our machines have something to look forward to. ®

'Eyeballing a computer' gets closer thanks to Anglo-Australian collaboration

IDF13 But is Chipzilla whistling in the dark?

Ring Roads, After the Crash and The Age of Earthquakes: Guide to the Extreme Present

'I know that object'

Goth-fear admiral has brain chips on the brain