It's been two years and no patches, say researchers 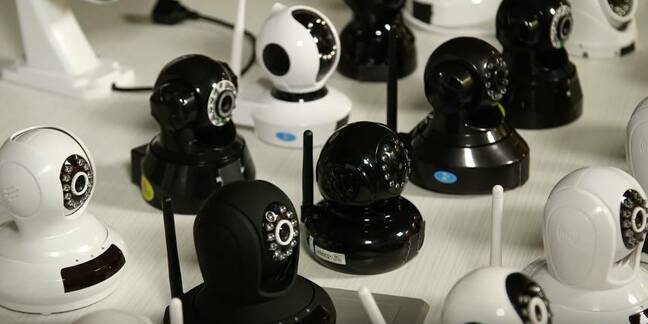 So say researchers with Cybereason, who claim a pair of high-profile vulnerabilities they spotted in surveillance cams two years ago have been completely ignored by vendors – thus leaving the door wide open for miscreants to hijack potentially "hundreds of thousands" of devices and use them for attacks.

Cybereason's Amit Serper says he and fellow researcher Yoav Orot exploited flaws in off-the-shelf internet-connected cameras back in 2014 in an effort to show how poor IoT security was at the time.

Since then, Serper says, the bugs have not only gone unpatched, but the insecure code has popped up in network camera firmware shipped by dozens of manufacturers selling their weak wares on Amazon. The Cybereason pair finger VStarcam as one vendor of vulnerable kit.

"I’m also not releasing the names of all the camera vendors," said Serper. "This would encourage hackers to look for the software flaws. I named VStarcam since their cameras are readily available from eBay and Amazon. Their cameras are also sold under the name Eye4."

You can use this handy web widget to find out if you have an insecure cam from its serial number and other bits of information.

"Most of the cameras run older versions of Linux, like version 2.6.26, while a few run the most recent version from around 3.0 and up," Serper continued.

"While the OS is somewhat modern, all the cameras were running extremely old and vulnerable software ... the web server software found in many of the cameras, for example, was from around 2002."

Thanks to programming blunders left in this crusty old code, attackers can bypass authentication checks to access the camera's stored files and pull the administrator password. From there, the camera's web server could be accessed and a second exploit could be used to gain root privileges that would allow the hacker complete control over the camera, including the ability to execute code, spy on the hardware's owners, and pressgang the cam into joining a botnet.

Serper notes that even if the dozens of different camera vendors using this vulnerable software were to deploy the fix, cameras already in use would remain vulnerable, as they lack the ability to properly receive and install software updates.

Thus, the only solution to fully close the flaw is to throw out the cameras and buy units with patched software. Below is a video showing how easy it is to exploit an at-risk, internet-facing surveillance camera remotely.

While these flaws are a serious issue on their own, Serper says that they reflect an even larger problem: the ongoing lack of proper security practices and patching techniques on the part of IoT hardware manufacturers and the researchers who help them find and fix holes.

"A smart (insert device here) is still a computer, regardless of its size. It has a processor, software and hardware and is therefore vulnerable to malware just like a laptop or desktop," Serper explained.

"Whether the device records The Walking Dead or lets you watch your cat while you're at work, attackers can still own it." ®

If malware wants to bury deep inside your Lenovo or Gigabyte servers, they can just ask Vertiv's insecure BMC firmware