Pic It turns out King Joffrey isn't the biggest scumbag at HBO after all.

A father says lawyers at the cable TV network demanded his 13-year-old daughter's artwork be taken off the internet after she drew a lovely picture titled "winter is coming" and posted the image to arts'n'craft website RedBubble.

"My daughter, who happens to be autistic, was doing an art challenge called Huevember which consisted of doing a piece of art based on a different colour as you worked your way round a colour wheel," Jonathan Wilcox, of Edwinstowe in the UK, told The Register on Thursday.

"She was uploading her pictures to a variety of sites and sharing them on Facebook. For this particular piece, she decided to title it 'winter is coming.' I do not believe she uploaded the picture to RedBubble to make any particular financial gain, she just thought it a sensible place to put it." 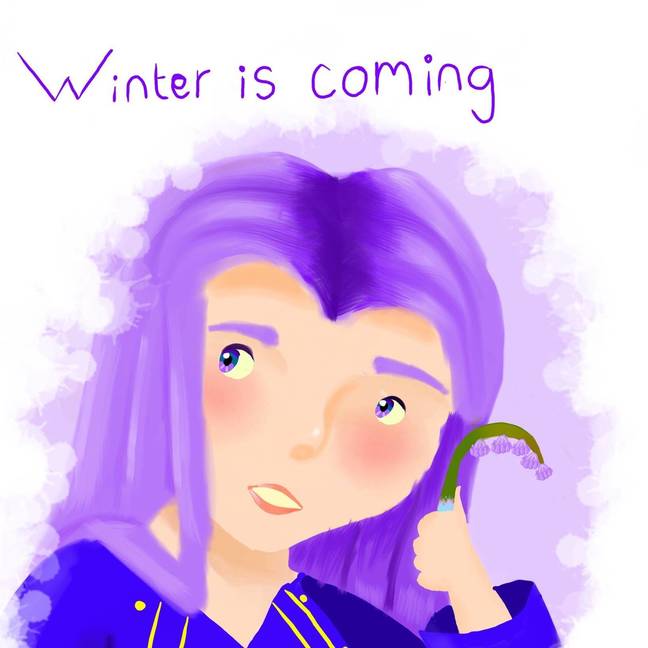 The teen's digital painting targeted by HBO ... Come at us, bro
Click to enlarge

According to HBO's legal team, the above illustration infringes the entertainment giant's intellectual property from its hit TV show Game of Thrones: HBO owns US trademarks on a line repeatedly used in the series, "winter is coming."

Here's a clip of the line from one episode:

The telly network and streaming-video goliath worries that letting a child's artwork bear those three words will cause irreparable harm to its brand, and so it sent Redbubble an ultimatum to strike the image.

Wilcox says Redbubble obeyed the demand and forwarded a copy of the takedown notice. At first, he was stunned into disbelief considering that his daughter's artwork makes no reference at all to HBO nor Game of Thrones, and it was not being sold or marketed.

"My first reaction to the letter was 'FFS.' HBO should get a life or stick something where the sun doesn't shine," Wilcox said.

"On further investigation, it appears HBO are doing this all over the place regarding this phrase. It seems to have upset a lot of people on Etsy and elsewhere who have had the same or similar letter."

Here's what Redbubble passed on to the Wilcoxs earlier this week, admitting it had immediately pulled their daughter's digital painting from the website and saying they could appeal the decision if they jumped through several hoops:

We have removed the following content from Redbubble in response to past complaints from Home Box Office, Inc., the claimed owner or licensee of related intellectual property and in accordance with Redbubble's IP/Publicity Rights Policy:

If you believe that removal of the above content is the result of a mistake (for example, that you have authorization to use the relevant content from the content owner) or misidentification, you can send us a counter notice. Such counter notice must provide the following information:

an electronic or physical signature of the person authorized to act on behalf of the owner of the relevant matter;

a description of the content which we have removed, including the URL on which the content was located on the Redbubble site;

a statement by you that you consent to the jurisdiction of the Federal District Court, San Francisco County, California, United States and that you will accept service of process from the person who provided notification described above or an agent of such person;

If you would like to send a counter notice please email the required information above to dmca@redbubble.com.

Please note that in some circumstances, if the work does not comply with our User Agreement and/or IP/Publicity Rights Policy, we may not be able to send your counter notice on to the party who has claimed ownership or licensee status over the intellectual property at issue. Rather, we may inform you at the time of receipt that we cannot reinstate the work. We may also request further information from you in order to determine whether the work can be reinstated. However, you should be aware that in some circumstances we will inform the above mentioned third party that you have provided a counter notice, as well as provide this party with a copy of your counter notice, which will include your personal contact information. This party will have 14 days to bring legal action against you in the United States. After 14 days, if they do not bring legal action and you would like your content restored to the Redbubble site, you may contact us to request that we reinstate your work. Redbubble may restore the content at that time if it otherwise complies with our User Agreement and IP/Publicity Rights Policy.

It is not exactly clear which law HBO invoked to demand the takedown: Redbubble, which is headquartered in Australia and has a US office in San Francisco, says it respects "several international treaties that relate to intellectual property." It's likely HBO asserted its trademark as you cannot, in America anyway, copyright a short phrase like "winter is coming."

Wilcox suggests that any other parent subjected to HBO's unique form of art criticism respond by simply turning the channel off. "Get on with your life," he said, "and boycott any HBO production, as they go around picking on and upsetting disabled children who have acted in total innocence."

We asked HBO to explain itself. A spokesperson was not available for immediate comment. HBO's trademark covers clothing, mugs, drinking glasses, hats, bags, mouse pads and similar tat. Redbubble is an online community of artists and a bazaar of t-shirts and bags printed on demand from artwork submitted by its users. Even though the Wilcoxs had no plans to sell their child's work, its presence on Redbubble appears to have been enough to trigger HBO's legal machine.

El Reg readers should be aware that, at least in the US, trademark owners must protect their intellectual property or risk losing control of it. We'd also like to say that, before you go outside, remember to dress warmly and bundle up in layers. After all, winter is coming. ®