Remember that amazing video of the whale leaping out the gym floor and splashing down? Yeah, it was BS

Magic Leap is neither magic nor leaping 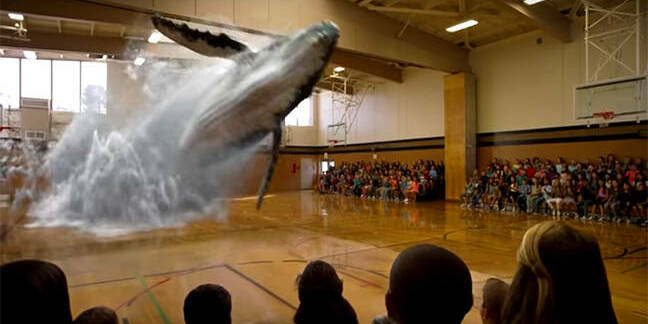 It was a shared "wow!" for millions across the globe: a video showing kids in a gym watching as a whale appeared to breach the floor, leap high in the air and come crashing down with water flying everywhere.

It was, we were told, on every TV channel and all over the internet, technology that we can soon expect to see in our homes: augmented reality. Fantastic, movie-like images in front of our very eyes. The future was here.

Except it wasn't of course, it was a marketing ploy for a company – Magic Leap – looking to build buzz and attract investors around its technology.

Never mind though, because the real technology was on display elsewhere in another video.

"Just another day in the office at Magic Leap," the video was titled, and showed a first-person view of someone at their desk, looking at email as it popped up in space, and then playing a game – their hands grabbing a virtual gun and robots falling down from the office's ceiling.

Magic Leap had managed to create an incredible augmented reality game, with wonderfully rendered holograms appearing in the real world and with you able to physically interact with it. The company started receiving hundreds of millions of dollars in investments and tech journalists were given sneak peeks, resulting in glowing testimony about the company.

Except that was also bullshit.

Despite claiming that "this is a game we're playing around the office right now," the game doesn't actually exist, and nor does the user interface. The whole thing was created with movie magic by the special effects people behind Mad Max: Fury Road, The Hobbit and a whole wealth of other movies, a company called Weta Workshop.

But hang on, here is another demo showing a robot floating under a table and a solar system rotating in space with someone at a desk behind it. This time, on the actual video itself, it says: "Shot directly through Magic Leap technology on October 14, 2015. No special effects or compositing were used in the creation of these videos." Surely this one is real?

Shot in very unusual lighting conditions – almost like dusk but inside – the video is again a first-person point of view, leaving it wide open to selective editing. You don't get to see the image appear, or disappear, or see the equipment used to capture it. And it is almost certainly a video feed from a system rather than a recording of a real experience. That means resolution, motion blur, color blur, latency and a wealth of other real-world visual problems will not show up.

Of course, none of this prevented countless unquestioning publications from fawning over Magic Leap and its CEO Rony Abovitz. WiReD's 10,000-word love letter to the company omitted to mention the enormous supercomputer and helmet that was required to make the magic happen.

It, and many other publications, misread the fact that Magic Leap is "ultrasecretive" as somehow a positive, as a sign of something incredible happening, rather than what it really is: a huge red warning sign that all is not as it appears.

Some did note that the demos seemed to require rather a lot of equipment and a huge helmet. But – and this is where the first line of make-believe was crossed – they waved away the fact that reducing it down to a wearable pair of glasses and an affordable computer was far from inevitable. It's just "digitization." It will take time and money but it will just happen.

Just because there are some amazing things in the world, doesn't mean that everything we imagine can be done.

Unfortunately for Rony Abovitz, he's done such a good job marketing his company in order to gather interest and raise money that now he's under pressure to actually produce a product that creates the same experience as the faked demos.

Just as with Elizabeth Holmes, Abovitz has been nothing but evasive when asked real questions about how his system works.

In a report on The Information, one journalist finally called it and said Magic Leap was a bust. Every time the reporter asked Abovitz details about the system he was given non-answers. And then, he noted, Abovitz began "repeatedly responding to probing questions with the phrase 'Squirrels and Sea Monkeys'."

Abovitz's response to being called out was equally telling: he had a full-blown Twitter meltdown. First he fell back on the "I worked hard on this and I'm a visionary" defense: "Tech startups are hard and intense – but it takes a different breed of awesome to strap yourself into a rocket."

Then he went back to vague promises of a wonderful future – just you wait – even offering free ice cream. Then he started lashing out at the questioners, calling them "grumpy mouse tech blogger writers," but magnanimously offering to let them see the amazing prototype when it is launched. (And when is that exactly?)

And then he started tweeting links to Wikipedia pages about decades-old rock bands... 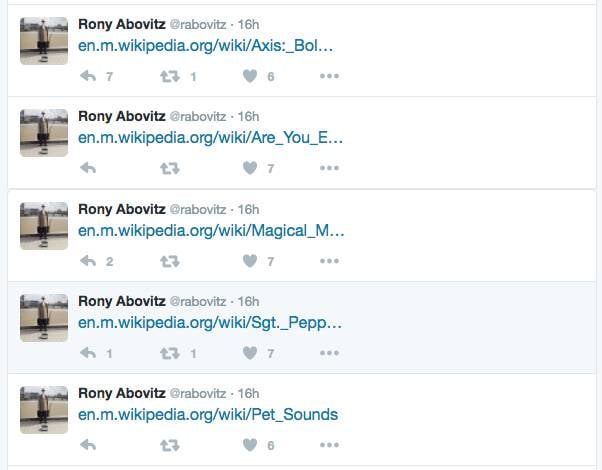 So, what is really going on?

Here's what we know: Magic Leap really, really wants to create a lifelike, high-resolution augmented reality. And it has enough money and enough talented engineers to test out the very latest technologies in order to get there. And it has done so, creating a really amazing demo experience.

But, here's what it has also done. It has repeatedly misled people about what is possible by creating essentially mini-movies using special effects and passing them off as real. It has run very controlled demos and refused to answer questions that highlight the tech isn't even close to ready. It has told gullible journalists what they want to hear rather than been upfront about what is possible.

The technology that Magic Leap is trying to perfect has been tackled by technological monsters including Intel and Microsoft, and they have fallen short. Except those two behemoths are not in any way reliant on the technology to continue their corporate existence: Magic Leap is.

The truth is that Magic Leap cannot get its huge prototype working in a much, much smaller version. It is under pressure to create an actual product and in order to do that, it has had to make compromise after compromise. The end result – which still does not have a launch date – is almost certainly going to be of lower quality than existing technology like Microsoft's Hololens.

And at that point, Magic Leap is no longer a $4.5bn company, but a firm of engineers who might – might – have some technology that can be salvaged.

"Stay tuned – the fun is just beginning," Abovitz blogged just a few moments ago as we were preparing to publish this story.

"All of us are pouring very long hours, heart, and soul into making something new – how we will enable your digital and physical worlds to come together in a very personal, social, and magical way."

Seeing as we haven't had many of these non-existent tech companies bubble up, here's a quick guide to help people spot one in future. If Company X is doing any of these, it's time to become suspicious:

So, farewell then, Magic Leap, we enjoyed your optimism. We even hope you get that bad first prototype out the door before the investors pull their money. All the best. ®