The FairSearch founders, Adam and Shivaun Raff, accuse Google of moving the goalposts in the battle over price comparison engines, in a new 46-page analysis of Google's defence (PDF).

It's a battle dear to European competition regulators. Brussels has said it wants a healthier market for digital startups in Europe, and the Commission is pursuing Google over historic charges that excluded startups to promote its own services. It’s one of three antitrust investigations being conducted by the Commission’s business regulator DG-COMP.

Google has recently stepped up its defence in a co-ordinated campaign, running full page advertisements in the Eurocrats’ favourite paper, the Financial Times last week and a corporate blog post. But watch the thimble, not the pea, say the Raffs.

A month ago it told the Commissioners they didn’t know what they were talking about. Google’s Kent Walker appeared to be arguing that because Amazon was doing well, the online shopping market was fine. FairSearch responded that this was a misdirection - “shopping comparison” is not the same thing, and Foundem, the price comparison started by the Raffs, agrees.

“In a new twist, [Google] pretends that the Commission’s case is about 'improved ads' rather than manipulated search results,” says Foundem's report. “Google may now be pinning any remaining hopes of evading the pragmatic and eminently reasonable non-discrimination remedy on an argument that search results and paid advertisements are interchangeable. But this would be problematic for Google: first, because it isn’t true, and, second, because convincing users that it is in their interests to abandon relevance-based natural search results in favour of payment-based advertisements is likely to be a tough sell..”

Foundem goes on to argue that advertising has gradually become blended in with, and sometimes indistinguishable from Google’s “organic” search results.

It’s harder to tell which is which. This year it became even more difficult, as the orange "Ad" badge was replaced with a green one. In information design, orange denotes a warning, while green is used to convey information. 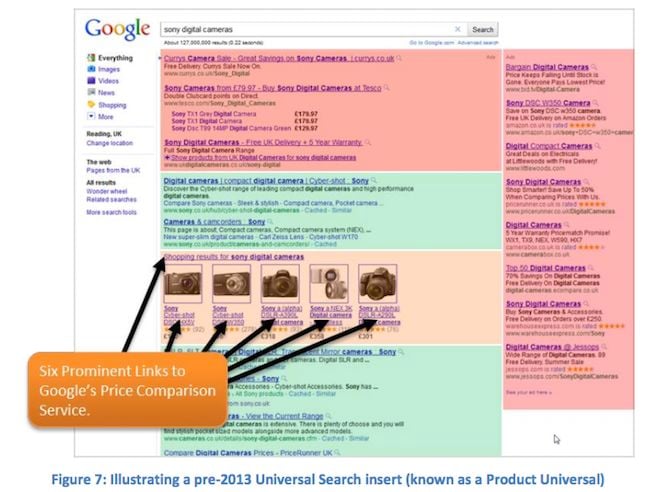 It mentions that in 2012, the US's Federal Trade Commission investigators concluded that: “While Google embarked on a multi-year strategy of developing and showcasing its own vertical properties, Google simultaneously adopted a strategy of demoting, or refusing to display, links to certain vertical websites in highly commercial categories.“

The price-comparison firm's analysis notes that Google’s users have an increasingly hard time distinguishing between paid ads and search results.

It cites a study which found that “[nearly] half of US searchers 'can’t differentiate between paid and organic search listings' and that 'almost 2/3 of clicks' for 'high commercial intent keyword searches' on Google now go to paid advertisements rather than to natural search results.” 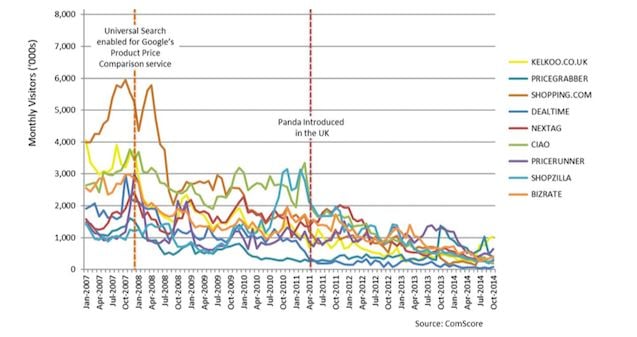 Google rebranded its Product Search as Google Shopping in 2013, and now merchants must bid for inclusion. The highlighted product isn’t there because it has the best price, but because the vendor has bid the most.

There is a line in a very small, grey font running along the bottom of the page that notes "Google is compensated by these merchants. Payment is one of several factors used to rank these results", but it is easy to overlook.

In its blog post, Google wrote that the Commission’s “original SO [Statement of Objections] drew such a narrow definition around online shopping services that it even excluded services like Amazon”. Here, Foundem says, Google “feigns confusion”. “Indeed, Google does not (yet) have a 'shopping' service to anti-competitively favour even if it wanted to,” it notes.