Technical support scammers have new bait with the discovery that Microsoft's Edge browser can be abused to display native and legitimate-looking warning messages.

The flaws exist in Microsoft's Edge protocols ms-appx: and ms-appx-web: which the browser uses to present warning messages when phishing or malware delivery sites are located.

When Edge detects suspected Malicious sites it colours them red with a feature called "SmartScreen."

"When we place a telephone-like number a link is automatically created so the user can call us with a single click - very convenient for these scammers," Caballero says.

By altering URL characters and appending a hash and a URL of a legitimate-looking site, a technical support scam page can be forged that is much more convincing than the deluge of fake Android and blue screen of death pages common to torrent sites.

Caballero found some of the Edge assets could be loaded directly through the address bar, albeit with errors, such as ms-appx-web://microsoft.microsoftedge/assets/errorpages/PhishSiteEdge.htm, while others would fail and perform a Bing search on the URL instead. 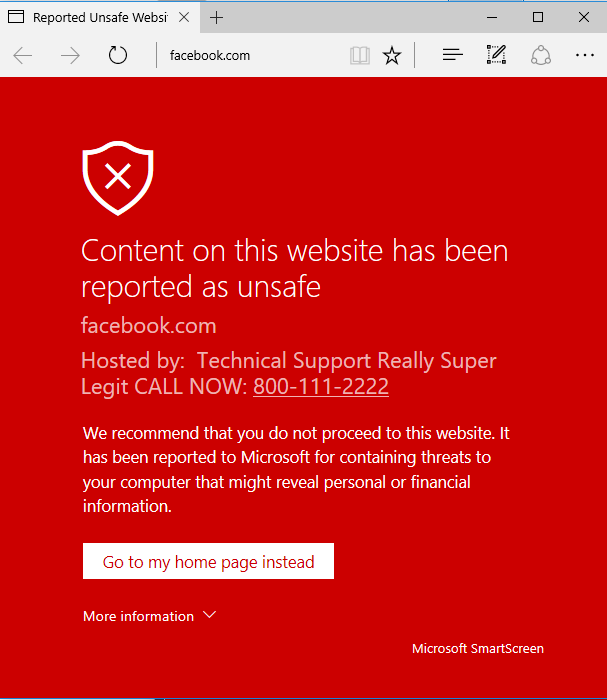 Those errors could be avoided by changing a single character in URL, and the displayed address changed to a legitimate site by appending a hash. ®

If you want to hijack widely used JavaScript packages, try phishing for devs through these DMARC-shaped holes in key Node.js domains