Mixed reality VR systems like Microsoft’s HoloLens and Google’s Project Tango are incredibly complicated, but maybe they’ve been approaching it from the wrong direction. A British outfit has improvised a very low cost alternative to costly nerd goggles, using cardboard. The Zapbox could open up many new uses cases for AR, such as giving people the ability to create their own Pokémon Go-style adventures.

Currently nearing the end of its Kickstarter run, the Zapbox attempts to address one of the biggest challenges in AR: identifying the real world. Traditional VR gear encloses you in a sealed environment; there’s no cut-out in the helmet for a camera in Google’s Daydream Helmet, for example. But Augmented Reality or Mixed Reality is a whole lot more difficult than plain old VR – it’s doing a lot more than tricking you with dazzling graphics. You need to interact with the world, and the system needs to know what it's looking at.

HoloLens has three cameras and a depth sensor to identify and calculate this precisely. The $30 Zapbox kit introduces cardboard markers or pointcodes as real-world prompts, and even more improbably, a handheld cardboard controller. But as it turns out, you don’t need expensive hardware to produce some impressive results – just some imagination. As you can see here.

I had a demo in the Zappar office and it wasn’t hard to see the potential. You don’t even need to slot your iPhone or Android into a cardboard helmet (which is part of the kit, along with a cheap fisheye lens) – you can hold it in your hands, Pokémon Go-style. I actually preferred this. The table had a few discs, or ZapCodes. Suddenly a hole appeared in the table, and up popped a bunny. 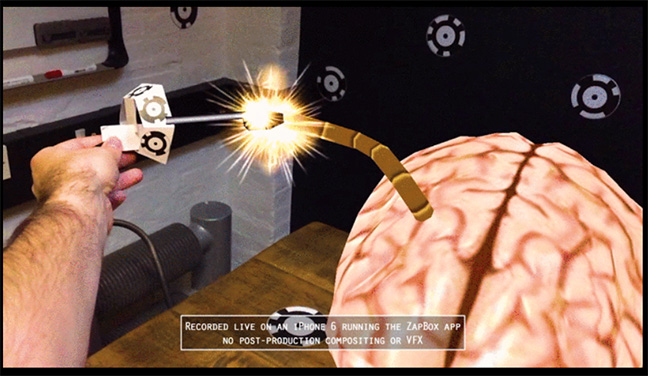 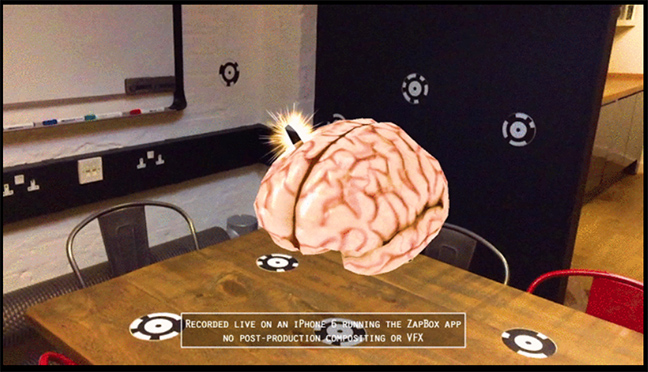 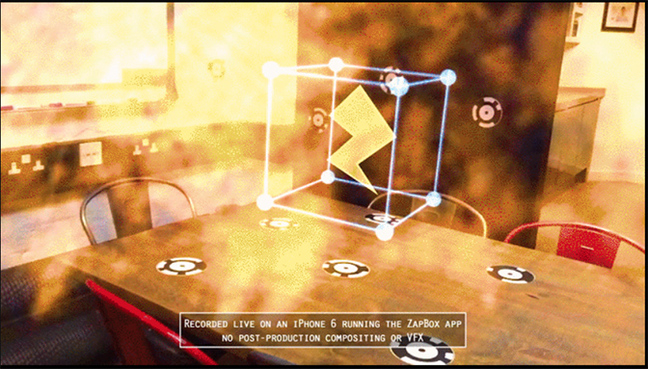 The idea behind Zapbox is to open it up to a community of creators, with low cost tools. ZapWorks Studio is free to download for hobbyists, and this allows you to import 3D models wholesale. You can publish content without app store approval. The bundle comes with example pointcodes: a WeFit-style game, a Mars experience for kids, and 3D painting. Crude but fun. So the limitations of the technology are actually a bonus. The big VR and AR players have chosen to work with major studios and big developers. Google’s Project Tango is working with world famous institutions. But with Zapbox you can imagine groups leaving markers for others to find, creating their own Pokémon games, or creating custom educational material.

Zappar was founded from graphics work at Cambridge. Simon Taylor’s PhD research focused on developing fast algorithms for locating known objects in live camera frames. Extra Reality was created to find commercialise uses for it in 2010, and this became Zappar. It has had plenty of experience of simple bespoke AR for commercial clients, so it is approaching it from a practical point of view, rather than building the bestest hardware, and trying to find a use for it.

It isn’t there yet; it still works best on a table top, Zappar’s Max Dawes told us. The real world has a lot of white walls, which befuddle the most expensive AR. And of course push the cost up immensely. In this early iteration, the zapcode doesn’t know you’re there, limiting interaction, so far. (The code could be on a moving object, such as another player, another instance of people providing the creativity rather than adding more expensive hardware.)

“One modeller told me, ‘I can meet my models for the first time’,” says Dawes.

It isn’t hard to see why Zapbox has blown through its $70,000 target on Kickstarter – it’s a great example of British ingenuity and improvisation. The run ends on Friday. It’s well worth a visit: as the frame-rate improves, and Zappar figures out the challenges of using ZapCodes outdoors, then who knows where this will go?

Google's own low-cost AR effort Project Tango is impressive, but still has steep hardware requirements for a phone. And it's taking so long to ship we may have to start classifying it as "vapourware". ®