Staff at the European Patent Office (EPO) have pleaded with the organization's Administrative Council for a third time to take action against its rampaging president.

In an open letter sent to the 36 country representatives that make up the council, a group that calls itself the EPO-FLIER team walk through the wave of criticism directed at Benoit Battistelli in recent weeks as he continues a campaign against staff that have resisted his reform efforts.

The letter was sent on the first day of the Admin Council's last quarterly meeting of the year in Munich – a meeting that has also been marked by large staff protests outside the EPO headquarters.

"It is time for the Members of the AC to act," reads the letter, "Mr Battistelli is causing immeasurable damage to the Office; he is now untenable." It asks that he "be removed, or alternatively, to be suspended until the end of his term."

In pictures of the protest, dozens of EPO staffer are seen walking around in white T-shirts with the slogan "I want my rights back" written on them. The EPO senior management has faced fierce criticism for imposing work conditions that are illegal in the countries in which the organization operates but due to its international organization status it cannot be forced to adhere to.

The EPO-FLIER letter highlights the extent to which Battistelli's actions have galvanized opinion across Europe. It cites politicians in France, Germany and Holland that have been highly critical of his actions, as well as media organizations in each country as well as the UK, several European staff unions that have made public statements about the situation, and even the EPO's own Boards of Appeals, which has been also be subject to pressure from Battistelli after it refused to rubber-stamp his actions against one of its members.

The Internet Labor Organization (ILO) has been the latest to publicly show its support for EPO staff, writing in a blog post that the EPO had become "a toxic environment."

And earlier this week, the International and European Public Services Organisation (IPSO) noted that "since the arrival of Mr Battistelli at the helm of the organization, the level of tensions within the EPO has met unprecedented levels" and referenced numerous critical articles written about the situation. 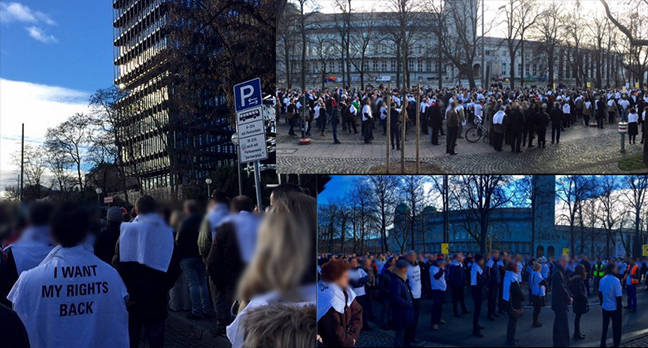 Images of the protest outside EPO headquarters on December 14 ... Source: Techrights

Even with such opposition however, few expect the Admin Council to take action against Battistelli. At its meeting in March, the council formally rebuked the president and told him to halt disciplinary proceedings against staff until an independent investigation into allegations of intimidation and procedural irregularities had been carried out.

Battistelli ignored that request, ordering his own review that, unsurprisingly, concluded things were fine. Shortly thereafter he fired the secretary of the EPO staff union.

At its meeting in June and again in October, despite him showing no signs of backing away from the aggressive stance taken against his own staff, the Admin Council avoided taking any steps against Battistelli. It even failed to put the issue on the agenda for discussion.

Most notably, following Battistelli's decision to fire the staff union secretary the minutes of the next meeting he held with his board included no warning of action against him.

"The Board then received an update on the various disciplinary measures which were recently taken," the minutes state. "The Board stressed the necessity for the Administrative Council to get timely briefings on any eventual new developments on pending disciplinary cases. The Office agreed to provide such information."

Earlier this month, the French industry minister Christophe Sirugue decried Battistelli's behavior, highlighting the "extremely negative nature of the decisions taken" and noting that Battistelli had been "the subject of convictions by the courts of the Netherlands, by the ILO bodies and the Board of Directors of the agency."

But, as a member of the broader Admin Council, he confessed, "I must admit that we lack allies in this matter."

Aside from being trained not to create waves if at all possible, some members of the Administrative Council have argued that Battistelli is forcing through much-needed reforms in order to make the European Patent Office competitive with similar offices in the United States and Japan.

However, Battistelli's abrasive personality and his insistence that the solution to each set back is to give the presidency greater power has long since stopped serving the organization itself and has instead becomes a personal crusade that benefits no one. ®