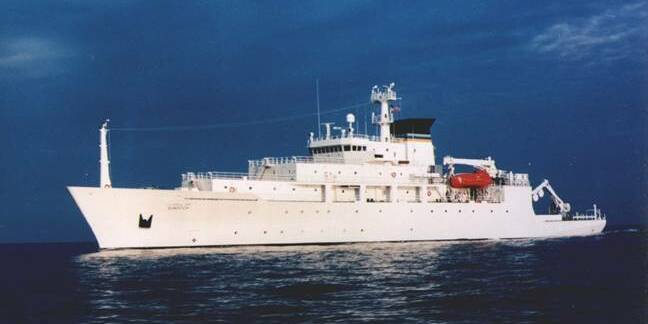 One of our submersibles is missing ... the USNS Bowditch

A diplomatic incident is brewing after US defense officials accused a Chinese warship of filching one of America's robotic submersibles.

We're told the Seaglider underwater drone was being picked up by the USNS Bowditch in the South China Sea after it surfaced for collection. As the US naval oceanographic vessel went to retrieve it, a Chinese ship that had been shadowing the Americans lowered a boat and grabbed it themselves.

In a statement to The Register on Friday, Pentagon press secretary Peter Cook said:

Using appropriate government-to-government channels, the Department of Defense has called upon China to immediately return an unmanned underwater vehicle (UUV) that China unlawfully seized on December 15 in the South China Sea while it was being recovered by a US Navy oceanographic survey ship.

The USNS Bowditch (T-AGS 62) and the UUV – an unclassified "ocean glider" system used around the world to gather military oceanographic data such as salinity, water temperature, and sound speed – were conducting routine operations in accordance with international law about 50 nautical miles northwest of Subic Bay, Philippines, when a Chinese Navy PRC DALANG III-Class ship (ASR-510) launched a small boat and retrieved the UUV.

Bowditch made contact with the PRC Navy ship via bridge-to-bridge radio to request the return of the UUV. The radio contact was acknowledged by the PRC Navy ship, but the request was ignored. The UUV is a sovereign immune vessel of the United States. We call upon China to return our UUV immediately, and to comply with all of its obligations under international law.

Seaglider drones are used to monitor ocean currents, water salinity, and other readings by oceanographers around the world. They are capable of long-duration missions thanks for a novel propulsion system that uses wings on the side of the craft and small changes in buoyancy to provide forward impetus.

There's unlikely to be any classified technology on the submersible – the basic design is well known and the Bowditch is largely staffed by civilians. We've asked the US Department of Defense for further comment on this. In any case, the theft on Thursday by the Chinese will worsen a deteriorating diplomatic situation between the US and the Middle Kingdom.

“This looks like signaling from the Chinese in response to Trump’s Taiwan call,” said Bonnie Glaser, the director of the China Power Project at the Centre for Strategic and International Studies.

“It is hard to believe this is the action of an independent commander. The Chinese now have much better control over the military, particularly the navy. It is in China’s interest to send signals before Trump is inaugurated, so that he gets the message and be more restrained once he is office.”

Don't hold your breath on that score. ®