+Comment SK Hynix has revealed it is thinking about creating a joint venture with Seagate focused on flash memory.

A filing with the Korean regulatory authorities that was reported in The Korea Herald said:

We are looking into various options, including setting up a joint venture with Seagate Technology PLC, to strengthen the mid and long-term competitiveness of our nonvolatile storage flash chips. But no decision has yet been made.

Obviously neither Seagate nor SK Hynix are making any public comments about their talks and the progress, or lack of progress, made. But the background of the disk-to-flash storage transition and the technological and broad business trends affecting both companies is obvious.

First of all, the disk drive market is declining as primary data storage in all sorts of devices changes from disk to flash, based on flash providing faster access to data with lower power and cooling needs. A flash foundry operator, like SK Hynix, needs product development, manufacturing and distribution channel capabilities to take its flash chip output. A vertically integrated, disk-based, development, manufacturing and distribution channel operator like Seagate needs to replicate its disk business model in the flash/SSD business, where it can bring its product and distribution-level expertise to bear on a flash output facility.

Both companies are weak players in the flash chip and drive market. According to Trendfocus, in second 2016 quarter SSD market share terms:

The third quarter didn't provide any comfort for either SK Hynix or Seagate; 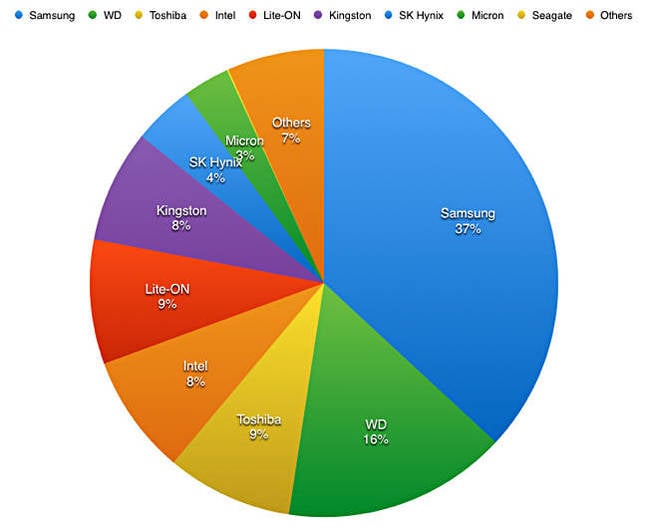 Both Seagate and SK Hynix can see that 3D NAND is the last technology card left to play in the flash chip/drive market and that some other technology, such as 3D XPoint and ReRAM will take over in the 2020s. They can either get a real stake in the non-volatile chip/drive business now or wait and be banished from it, or find it hugely more expensive to buy their way in later.

With WDC and Toshiba in a flash foundry alliance, and Intel and Micron ditto, then Seagate, number 2 in a 3-player disk drive market and arch apostle of vertical integration in the disk drive manufacturing business, is in a dreadful situation.

It has had alliances with Samsung and, latterly with Micron, while espousing the message that it’s fine to buy NAND flash chips in the general market rather than be having strategic relationships with foundry manufacturers. Everyone and their brother seriously doubts this.

The Seagate-Micron relationship was revealed in February 2015, and one aspect of this was to secure a strategic supply of Micron flash chips for Seagate. However, the Nytro XF1230 SATA SSD which Seagate announced in August 2016 uses SK Hynix chips and an SK Hynix LAMD controller.

Clearly, at that point, Seagate’s commitment to Micron flash was weaker than thought.

SK Hynix is primarily a DRAM supplier, number 2 after Samsung, with NAND as its secondary interest. It has partnered HP (HPE) over the long-delayed Memristor technology. However HPE is now allying with SanDisk over ReRAM. ReRAM together Micron and Intel’s XPoint looks like the leading contenders to replace NAND when that technology runs out of density development steam.

In NAND, SK Hynix is a distant follower to the other foundry operators, with Samsung, WDC-Toshiba and Intel-Micron far ahead in terms of market share. 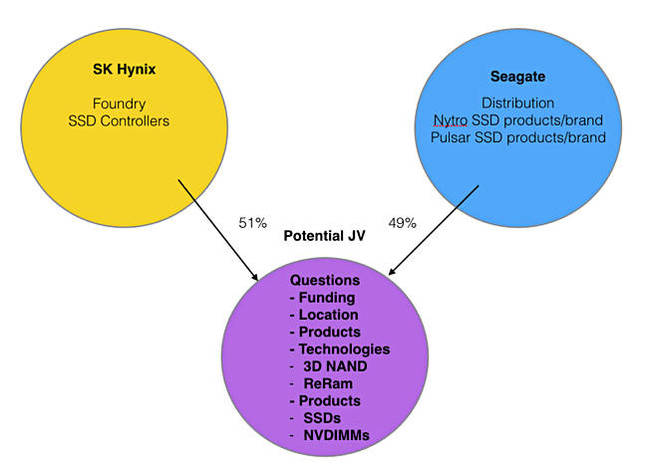 Seagate is an obvious potential partner. Business Korea, citing industry sources, suggests SK Hynix would own 51 per cent of the potential JV with Seagate owning the rest.

SK Hynix could pump in its NAND chips and controller technology, with Seagate contributing its controller and flash drive product capabilities, and its distribution channels to take the JV’s product output. The JV could use Intel and Micron’s IMTF JV and the WDC (SanDisk)-Toshiba relationship as models to show what’s possible.

There are substantial issues to be resolved in any negotiations, such as funding, staffing, locations, leadership and so forth. Seagate, with two previous attempts at NAND flash chip tech supply deals behind it (Micron apparently, and Samsung before that) needs to show it can partner in this area.

We wonder, as does a Seeking Alpha writer whether Seagate tried pursuing a closer deal with Micron? Setting up a JV with SK Hynix would be universally seen as a good thing, and show that Seagate’s leadership is still alert to strategic necessities, beyond relying mostly on fat, capacity-optimised disk drives for its future revenues. ®