Behold! The Miracle of Jarvis

Guess what task the goal-driven nerd billionaire Mark Zuckerberg, the world’s fifth richest man, set himself this year. Solving the Kashmir crisis? Eradicating polio? Choosing and solving one of the problems in the Millennium Prize?

Don’t be daft. He’s turned his house into a robot buddy.

“My personal challenge for 2016 was to build a simple AI to run my home - like Jarvis in Iron Man,” Zuck explains on his Facebook page in a post unexpectedly titled “Building Jarvis”.

Facebook’s corporate communications chiefs must have had high hopes for their CEO’s Christmas Story. Jarvis would be like the Baby Jesus. Zuckerberg would learn from it (“These challenges always lead me to learn more than I expected”) while he taught it. The Jarvis Story promised to do two things. It would position the founder as a fearless DIY pioneer, while allowing us to marvel at the wonder that is Facebook AI. For as you’d expect, Facebook’s chatbots and other services are heavily promoted.

But, if anything, the Miracle of Jarvis achieves the exact opposite.

Building a robot buddy is not an original idea. It’s exactly what every other goal-driven nerd billionaire in Silicon Valley seems to want to do. Satya Nadella wants a robot buddy. Everyone wants one. Does nobody have any imagination any more? A robot pal combines the two traits we see most of all in Silicon Valley: the tragically antisocial and the chronically lazy. Silicon Valley has no more ambition than a 15-yea- old teenager. It allows them to play God and be amazed by magic at the same time. 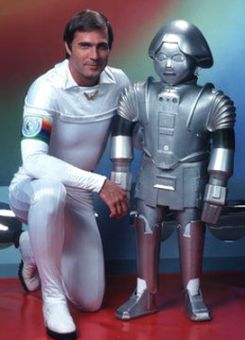 "Here's one I made earlier"

For example, the “AI” that Zuckerberg built would decide whether or not to let friends into his house.

“I installed a few cameras at my door that can capture images from all angles,” he writes.

Nothing weird or creepy about that, Mark.

He then built a server to monitor and ID the faces.

“Once it identifies the person, it checks a list to confirm I'm expecting that person, and if I am then it will let them in and tell me they're here.”

So don’t show up at Chez Zuck unexpected - you won’t be able to get in. This leaves unanswered the question of what happens if you’re not on “the list”? I’d like to think this would involve trapdoors, and sharks with lasers, but that’s just wishful thinking.

(We should note that in reality, Zuckerberg has a 24 hour security detail, and also tapes up his own webcam - something that would impair Jarvis's face recognition functionality quite significantly.) 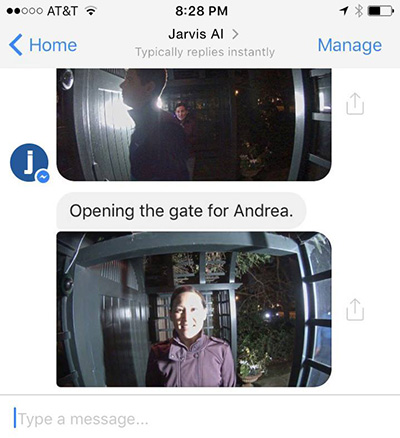 When Jarvis is not dispatching unexpected visitors, it’s making Zuck’s pocket buzz like a beehive.

“In the middle of the day, if someone arrives at my home, Jarvis can text me an image and tell me who's there, or it can text me when I need to go do something.”

Astonishingly, the Facebook CEO concludes that his year-long experiment has been a success – and has allowed him to talk less than in 2015. Which is great, and surely defines him as a Man Of The People.

Good times lie ahead, he says:

“I have always been optimistic about AI bots, but my experience with Jarvis has made me even more optimistic that we'll all communicate with bots like Jarvis in the future.”

Your reporter remains dubious that many of the “AI” breakthroughs touted in 2016 will amount to very much, for when you read the small print, much of it really turns out to be "Fake News". And I’m confident that the consumer public is not in a hurry to use chatbots, on which the hopes of so many tech plutocrats are pinned, or be interrupted by "smart reminders". But for a glimpse of a future in which Zuckerbergs have even more power, and can harness technology that actually works, do check out the trailer for the forthcoming movie The Circle.