Github star count has it beating Ceph and Swift

Backgrounder Minio and its µServer were first described by El Reg in December a year ago. Now we have had a closer look, courtesy of a press tour to Silicon Valley earlier this month.

Minio was co-founded by Anand Babu (AB) Periasamy and Garima Kapoor in 2014 and has a recorded $3.3m in seed funding, though it might be more. This comes from three VCs: General Catalyst Partners, Nexus Venture Partners and Index Ventures, and some nine angel funders, who include Mark Leslie and Jerry Yang.

There is a team of 16 engineers with no managers, and Periasamy running the show. He talks extremely fast. Listening to him pitch his company and its software, you realise the old corporate IT development type certainties just don't exist. DevOps, S3, Docker and GitHub is the world he knows. 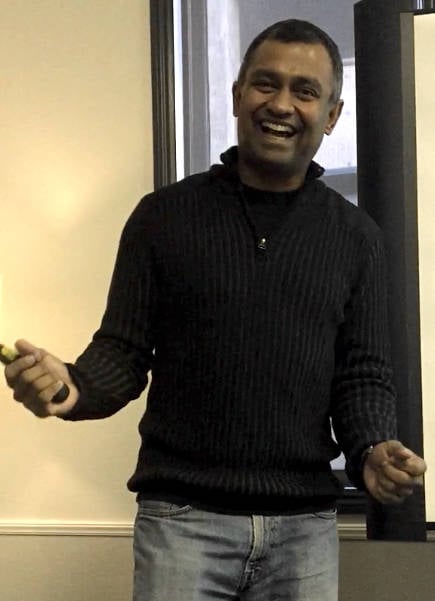 You could run Minio on Amazon’s EC2 or other public clouds. Minio tracks its downloads and Periasamy said: “More than 90 per cent of our downloads are happening on Docker. We provision object storage as containers. Minio is involved as a service.”

He claims the old models of block storage and file storage are all going away. MongoDB andMySQL use simple key:value storage. Developers are familiar with it and looking for S3 storage, not object storage per se. Periasamy says that there are no knobs to turn and everything is dead simple. The object storage becomes part of an application’s code stack.

Periasamy says: “Where does Minio fit? We need a scale where our data footprint is comparable to Amazon. That's where we'll survive or get crushed. … We have to be critical part of our customer's structure and then they'll pay us. … I don't want to be in the infrastructure business; that's a race to zero.”

There is a Minio community centred around its Github presence, with 113 committers, 643 community members, and 6,000+ Github stars; “star" is a "Like" in the Github developer world.

The download trends show exponential growth, and Periasamy talked of 300,000 Docker pulls. He says: ”We are now as big as Amazon when it comes to S3.” The team appear to be in tune with developers and push community values quite strongly.

We asked Periasamy about Minio getting income from customers. He blithely replied: “Getting paid? At million dollar checks it starts to become reasonable for us. We don't want small business. It's a distraction. Let it go. We want growth.” He said he still has half his seed funding in the bank.

Minio has a phase 1 and phase 2 development plan. Phase 1’s goal is to lead in open source object storage. It involves providing Minio µServer and Client software and an SDK. Major software features include:

Minio Reed-Solomon-based erasure code runs in-box or across boxes. Over 16 drives there are 8 for data and 8 for parity. Data and parity blocks are sharded across the drives. Half the 16 drives could die and you're okay.

Users can replicate from Minio to S3 Amazon or Google Cloud Storage (via S3) targets. You can continuously mirror between any S3-compatible storage service. Minio Mirror does a full scan and transfer first and then sends updates.

Phase 1 started in 2015 and ends at the end of 2016. Phase 2 runs from 2017 to 2018 and its overall aim is to accelerate object storage adoption. It includes a Minio X product and a deep learning engine.

Periasamy says: “The value of the data is many times more than the storage.”

He thinks a killer app is to be able to search within unstructured data, like images, using deep learning-generated metadata. The idea is for the system to respond to queries such as: ”Find a blue coffee mug.” The metadata for a blue coffee mug could be viewed as a kind of semantic hash.

This by the way, as we understand it, is currently impossible.

Machines could then recognise coffee mugs in photos with no humans in the loop. In other words Minio X will generate and provide object content metadata, such as descriptions of elements in an image.

Hang on, are they looking to kill image CAPTCHAs? 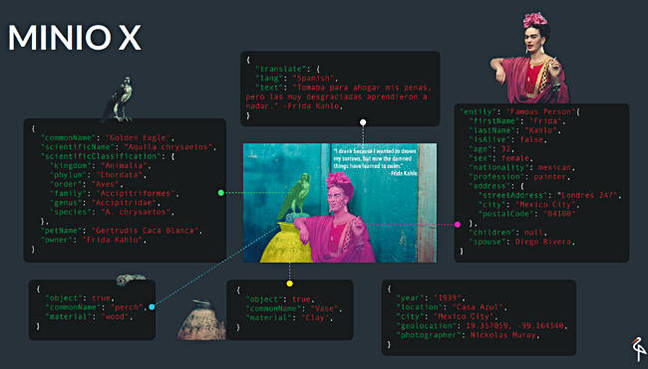 At this point we began to find it hard to be on the same planet. This is a guy who takes in $10m or so seed funding to build an S3-compatible object storage server, which he then open-sources. He’ll take in million dollar checks from large enterprises who like Minio for some reason, and then go off and build a deep learning facility to search inside objects.

He's a nice guy and talks at lightning speed, and we’re left thinking he’s either a genius or or a speed-talking fantasist.

Given the Gluster and Red Hat background, storage desk tends to think its the former. Put Minio on your S3/object storage/deep learning radar. ®