It’s on: the fight over Rogue One or Force Awakens. Which was better? Which has the best bad character - is it calculating Commander Orson Krennic or bratty Kylo Ren?

Sure, blast away kid – but like all those before Luke aiming desperately for the Death Star’s exhaust port, you’re missing the point. What we’re really arguing about here is: which film best carried the sacred flame of Star Wars?

I’ll settle this now: Rogue One.

No, it’s not because I’ve got some pre-disposed downer on JJ Abrams, as some might suspect. Any problems I have with Abrams originate from bitter experience and past letdowns. Rogue One director Gareth Edwards gave us another Godzilla reboot, for God’s sake – his biggest film to date. Omens for Rogue One weren’t exactly promising.

But for me, it’s the stormtroopers that swung it.

Yes, there will be a discussion about Rogue One’s “dark” factor – because we all know how “being dark” made Empire “better” than New Hope.

Not to detract from New Hope, obviously, as we wouldn’t be having this discussion without it. 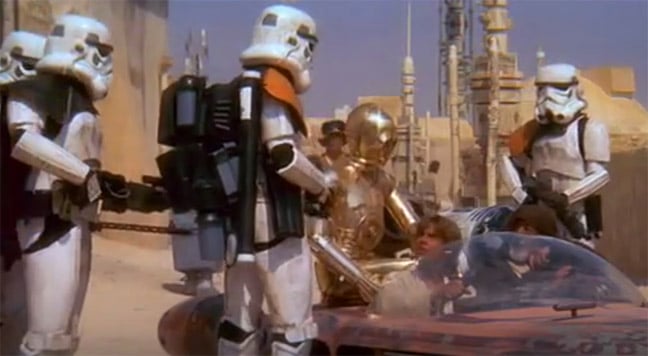 Rather, the award of Star Wars flame carrier goes to Rogue One for the simple reason that it restores one very central and dominant character of Star Wars to its rightful position in the order of things. No, not Darth Vader or the, frankly, amazing CGI revival of Peter Cushing’s hatchet faced and ruthless Governor Moff Tarkin.

It’s the humble stormtrooper. That white-shelled, helmet-headed enforcer, grunt and all-round ubiquitous presence that signalled the presence of the Empire.

Whether it was a sandblasted rock, a hanging icicle of a planet or a trading rock, the stormtrooper is always the first sign of the presence of the dreaded Empire.

And they are hydra heads – take one down in a darkened alley or hangar deck, and a pod of six more just spring up in his place.

The stormtrooper is the tin-headed German solder of all those WWII films: the hapless flatfoot, the jobsworth, the officious paper-checker. But which will you encounter? The idiot sentry looking the wrong way enabling you slit his throat from behind? The pair of fools chatting about some match shortly before you blasted them? Or, the zealous officer leading a group of raw recruits, demanding to see your papers and ready to clamp your K-2SO droid in chains?

Stormtroopers are mean and petty, cruel and heartless and – mostly – unquestioningly loyal. They are lousy shots, unable to hit the broad side of a star destroyer, and completely expendable: when stormtroopers aren’t going down like bowling pins at the hands of the rebels it’s their own side that’s closing the blast doors on them or turning the Death Star’s primary weapon on the rebels and them regardless of just how many stormtroopers are left behind, mixed up in the fight.

And that’s why Rogue One carried the mantle. Rogue One gave us all of these stormtroopers: your basic issue stormtrooper of New Hope, Empire and Jedi. Uncomplicated, expendable, faceless and - sadly for him – needing a few more hours on the blaster range.

Alas for Force Awakens, thanks to the past decade we’ve had a completely different kind of stormtrooper. We peeked behind the mask in Clone Wars - saw the boy, the man, the dad. Stormtroopers of the Grand Army of the Republic acquired names, like Cody, and ranks, became heroes and veterans of battles. Cody became Finn in Force Awakens, the troubled non-conformist who may have The Force running through his veins.

The stormtroopers’ story became a Greek tragedy: a clone child minus a family manipulated by Sith and Emperor. Loyal men like Cody were told the Jedi were the enemy and it was democracy that was wrong, they were instructed to kill traitors and uphold civilization. As loyal soldiers they obeyed. 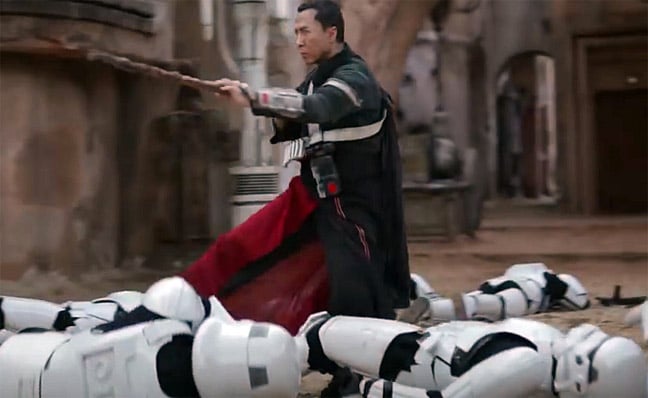 Troopers down: hopeless, hapless, cannon fodder once more in Rogue One

During this interim, stormtroopers became cool with spin-out stories, action figures and costumes for Cody, stormtroopers even boldly popping on hip T-shirts.

Somewhere, somehow, all this humanizing and coolness, saw Empire and its enforcers gain first of all equivalency with the rebel forces and then to surpass them.

But that’s not what Star Wars is about. #dumpstarwars just woke up to the fact the story counts among its inspirations Hitler and his jackbooted Nazis in Germany. What? did you miss the massed strutting, the black uniforms and tin hats in New Hope? Did the word "stormtrooper" not drop a hint in itself? The "stormtrooper" conceived by the Imperial German army of WWI as an elite, crack, fast-moving unit and inflicting a crushing reversal against the Italians at Caporetto in 1917 and then in WWII on all fronts by Hitler but especially effective during the opening phase of Blitzkrieg - again - to devastating effect.

The George Lucas of Episodes IV, V and VI in hippy 1960s and 1970s California never meant for stormtroopers to grow identities and personalities or for us to empathize with them and their plight. Same way it was always supposed to be the rebels with ragged ships like the Millennium Falcon and vague-to-non-existent dress codes that were the cool guys, not the group sporting the shiny helmets whose faces you can’t see and who’ll willingly shove your can into a blast door as an precursor to demanding your papers. That’s fascist behaviour. Not cool.

And that’s why Rogue One beats Force Awakens. Because the stormtroopers say where Star Wars is. The stormtroopers are once again faceless, nameless goons, bossing people around, getting their throats cut, and serving as cannon fodder. And Star Wars is back to being a battle between humanity and the very, very bad guys.