NASA plans seven-year trip to Jupiter – can we come with you, please? 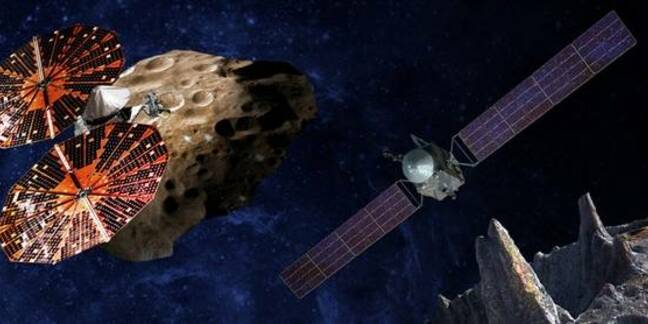 Vid NASA has OKed two new missions to study some of the most interesting asteroids in our solar system, as part of its ongoing Discovery mission program.

The first mission, named Lucy, will launch in October 2021 and will head off to the gas giant of Jupiter to explore its Trojan zones. These are two points on either side of the planet where the gravitational pull of the sun and Jupiter equalize and trap clusters of asteroids left over from the beginnings of planetary formation, and Lucy will probe six of them.

"This is a unique opportunity," said Harold F Levison, principal investigator of the Lucy mission from the Southwest Research Institute in Boulder, Colorado.

"Because the Trojans are remnants of the primordial material that formed the outer planets, they hold vital clues to deciphering the history of the solar system. Lucy, like the human fossil for which it is named, will revolutionize the understanding of our origins."

Lucy will spend seven years studying the asteroids using a multispectral visible imaging camera to map their surfaces and an 8.2-inch (20.8-centimeter) aperture telescope similar to that used on the New Horizons mission that mapped Pluto on the probe's flyby.

The second mission, dubbed Psyche for reasons that will become obvious, will investigate the shiniest object in the solar system. The asteroid, known as 16 Psyche, appears to be made up almost entirely of metal and the astroboffins think that it's the remains of an ancient planet's core that has had its surrounding rocks pounded away by millennia of impacts from space debris.

"This is an opportunity to explore a new type of world – not one of rock or ice, but of metal," said Psyche Principal Investigator Lindy Elkins-Tanton of Arizona State University in Tempe.

"16 Psyche is the only known object of its kind in the solar system, and this is the only way humans will ever visit a core. We learn about inner space by visiting outer space."

The Psyche mission will launch in October 2023, grab a gravity assist from Earth for some extra speed a year later and then head off to Mars for a second assist in 2025. Three years later it will arrive at its target and spend the next two years probing the metallic object, provided it's not a hostile alien fortress. ®