'Hands down the best desktop Linux distro I tested in 2016'

Fedora 25 is the first of the major Linux distros to employ the Wayland graphics stack by default.

Wayland is one of the biggest low-level changes to hit Linux distros in recent memory and what's most remarkable at least when it comes to Fedora 25 is the move is almost totally transparent. Provided your graphics card is supported, you're unlikely to even notice that you're using Wayland.

That's partly a testament to the Wayland project's efforts but also to Fedora in particular, a result of the Fedora developers' decision to wait before making the switch.

It's been disappointing to see Wayland postponed time after time for the past few Fedora releases, but the waiting has paid off in stability and seamlessness.

I haven't hit any major bugs or had any apps that won't work (some of this is no doubt due to XWayland, which is the fallback X server that runs in situations where Wayland isn't supported). I have, on the other hand, noticed the default GNOME desktop in Fedora is considerably snappier, particularly animations.

That doesn't mean everything is perfect in the world of Wayland. I like to use Redshift or f.lux to tint-shift my screen at night as I find that much easier on my eyes. Neither application seems to work under Wayland thanks to changes in the security model of Wayland versus X.

Fortunately it seems Redshift-like features may be coming straight to GNOME itself. In the meantime, if you want to get tint-shifting working in Fedora 25 with GNOME, there's a COPR repo available that adds some new colour profiles to GNOME and a dawn/dusk timer to switch between them. There's some good instructions here.

Other than the tint-shift problem, my transition to Wayland has been smooth and largely uneventful. Some people with other graphic card/driver combos have reported problems with video playback but I haven't run into that in my testing (mplayer works fine on my Lenovo and a Dell XPS 13 I happened to be testing when Fedora 25 came out).

While the move to Wayland is definitely the big news in this release of Fedora, it's not the only thing that's new by any means. There's a major GNOME update, a brand new kernel and some changes in the Fedora Next lineup.

The most visually noticeable thing is the update to GNOME 3.22, which has some nice new features in the Files app (the application formerly known as Nautilus). There's a batch-renaming tool that makes it easy to add a prefix, suffix, or do date-based renaming of files. Files now includes a built-in file compression tool so when you double-click a .zip file it just extracts the contents to a folder without opening File Roller.

This release also sees the GNOME extensions API being declared "stable". That's mostly good news for extension developers, but it also means that updates will no longer run the risk of breaking all the extensions you rely on to customise GNOME Shell.

The GNOME Software app continues to improve too. GNOME 3.22 sees Software adding better support for Flatpak apps. If you haven't had a chance to dive into the world of Flatpak apps yet, Fedora 25 makes a good platform to experiment on. Not only can you install Flatpaks using the GNOME Software app, with Fedora 25 you can even search or browse specifically for Flatpaks via Software. You'll now be able to see the source information and sandboxing status of Flatpaks before you install them.

Flatpaks are still a bit rough around the edges and the very tight sandboxing model that governs them can mean that Flatpak versions of your favourite apps are missing a few features, but they're getting closer to usable status.

The other big news in GNOME Software actually arrived in the previous Fedora release – system upgrades from the Software apps. I was able to upgrade from Fedora 24 to 25 by clicking a button in Software and everything just worked. Long-time Fedora users will know that this is nothing short of a miracle. I should note that I run a mostly stock install of Fedora with few GNOME extensions or other customisations. Most of the system update problems I've seen people mentioning on forums and bug reports around the web come from library conflicts so the more stuff you have installed the greater the chances GNOME Software won't work. Still, it's worth a try. From what I've seen, its one weak point is a lack of debugging messages when things do go wrong. If it doesn't work I'd jump over to the terminal and try using DNF to see what's causing the problem before you resort to the old Fedora nuke and pave upgrade path.

Along with Wayland and a new version of GNOME, this Fedora is notable for the update to Linux kernel 4.8.6, which should go a long way to fixing many of the Skylake bugs that cropped up with Fedora 24. 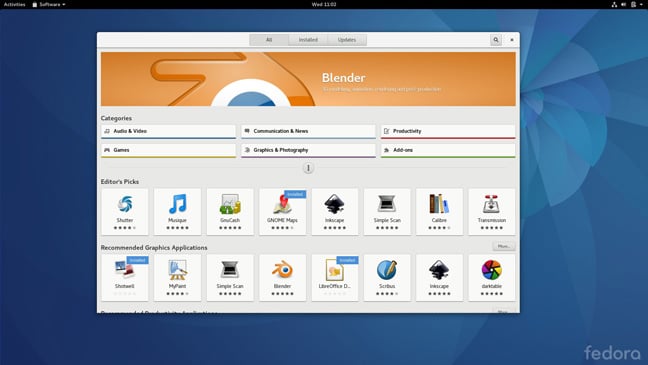 Kernel 4.8 was a major update with improvements for GPUs, networking, ARM support and file systems updates among other things. It was disappointing that Fedora 24 missed out by a couple of weeks, but at least it's here now.

It's also worth noting that Fedora 25 ships with MP3 support straight out of the box. Fedora probably won't be the last distro to do this since the US patents covering the MP3 codecs expired earlier this year. Aside from possibly making you feel old – yes, you've (possibly) been using Linux for longer than the lifespan of a US patent – that means you can play MP3s without a trip to the Fedora repos. There's no encoding support yet, though. For that you'll need to install some software.

The final change worth mentioning is that the Fedora Next line-up has been revised. Past releases had three editions Fedora WorkStation, Fedora Server and Fedora Cloud. Fedora Cloud has evaporated and been replaced by Fedora Atomic. As the name suggests, Fedora Atomic is built around Fedora's Atomic project and is tailored for those running container-based server systems. There's too much new to cover here, but suffice to say that there may be some very cool stuff headed toward CentOS in the near future, including a really nice GUI to manage SELinux.

Fedora 25 WorkStation is hands down the best desktop Linux distro I tested in 2016. With Wayland, GNOME 3.22 and the excellent DNF package manager, I'm hard-pressed to think of anything missing. The only downside? Fedora lacks an LTS release, but now that updating is less harrowing, that's less of a concern. ®