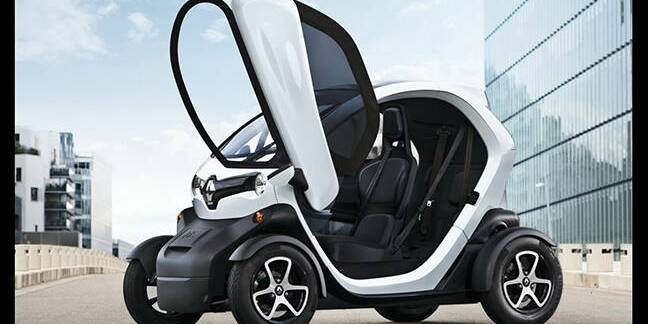 As the car industry unveils its latest and greatest at the North American International Auto Show, the French carmaker is pushing the POM – which stands for Platform Open Mind – as the future of cars. The space-age golf cart, pictured above, will be powered by an open-source vehicle operating system that runs on ARM-compatible chips.

According to the marketing blurb, this approach will allow third parties to "copy and modify existing software to create a totally customizable electric vehicle."

Meanwhile, Google's (OK, Alphabet's) self-driving car arm, Waymo, is pushing its system of sensors for the next generation of cars. Waymo hopes to provide a much cheaper smart sensor approach by selling companies both the hardware and software to expand into self-driving technology without the need to spend a decade doing their own research and development.

According to people at the auto show, the "lidar" system (using lasers to create a kind of radar) will cost car manufacturers around $7,500 and comprises eight cameras and three different types of lidar sensors.

But back to Renault's POM. It is based on the company's tiny Twizy vehicle – which somewhat undermines Renault's claim that it is putting out the "world's first open-source mass-market vehicle" – but the move is nevertheless one worth watching.

In the past few years, there have been a number of high-profile hackings of cars that have served to highlight that computers are not only an ever-increasing part of the modern car, but also that car companies are dangerously behind when it comes to digital security.

Most cars run their own proprietary software – which was never much of a problem when all it was doing was running the radio and air conditioning. But with each year, cars grow increasingly complex, and more and more decisions are being left to computer systems in the car.

As those systems have started reaching out beyond the immediate confines of the vehicle in order to offer advanced features like mobile Wi-Fi spots, remote access, automated driving systems, and data connections to your own devices, so the risk of software exploitation has grown.

Which of course leads us to the age-old debate of the merits and problems of open-source versus proprietary software.

Renault is steering clear of talking about the security risks however, and is focusing its promotional efforts on the idea of creating an "ecosystem" of companies that work with its cars' software to create third-party apps and features.

It's not hard to see how this could be both wonderful and terrifying. For example, most in-car stereo systems are still miserably out-dated. And most user interfaces remain stuck in the 1980s (although Tesla may be an exception).

By opening up its software, Renault might encourage companies to rethink the in-car experience and make it more user friendly (here's betting one of the first uses will be the ability to select a new wallpaper image for your screen).

There are also some possible engineering advances that might result: software that makes more of the sensors that are now included in most cars. Or improved power usage from electric vehicles. You could imagine an app that lets you snap a picture or video of another car driving dangerously and send it on to the authorities (what sweet revenge on people that cut you off).

But of course, for every useful application, there is a security risk. How would apps be firewalled from critical functions like acceleration or gear changes? What privacy risks exist in providing companies with your precise location? Will your car be getting endlessly broken into thanks to weak security on its wireless locks?

Plus of course, more apps on a screen in front of a driver just present more opportunity for people to distract themselves when they should be paying attention to the road.

"Connected vehicles will enable new business models that deliver a broad range of choices and experiences for end users," said ARM embedded marketing VP Richard York. "The automotive industry will increasingly focus on the specific functionality that owners want, such as comfort level and entertainment."

Renault's global director of Advanced Engineering, Pierrick Cornet, said: "Our industry is changing rapidly, and being able to work in all new ways –incorporating new technology with new scenarios in mind – ensures we are constantly exploring new areas of transportation, connected cars, zero emissions, and more that benefit our customers." ®