Quantum: Well, would you look at that. We've made some money!

Quantum has surprised itself with preliminary quarterly revenue numbers well ahead of plan.

Back in October, its second fiscal 2017 quarter saw an uptick in both revenues and profits after a whole slew of quarters showing downturns and even losses, as declining tape revenues obliterated gains from multi-tiered, single namespace and scale-out file management software StorNext. Then StorNext revenues dramatically emerged from the data protection swamp and overtook tape automation.

Revenue is 4 per cent up on a year ago and just 1.3 per cent down on the prior quarter, seasonally Quantum's strongest. 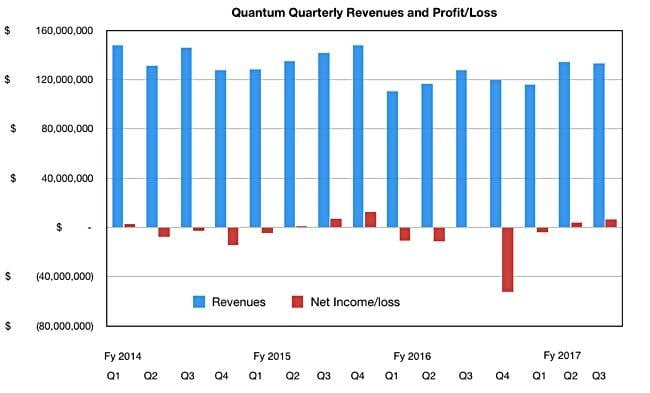 Quantum recently upgraded StorNext to v5.4 and this product line, called scale-out tiered storage, brought in $40m in the third quarter; it was $35.7m a year ago. Quantum crows that this represents an increase of 12 per cent and the 22nd consecutive quarter of year-on-year growth.

Things are looking up and, revived by this sequence of good quarters as its business model and strategy comes into its own, Quantum may start looking outward at expansion routes. New prospects are steadily opening up as Quantum shakes off its in-the-trenches past and gains confidence. ®