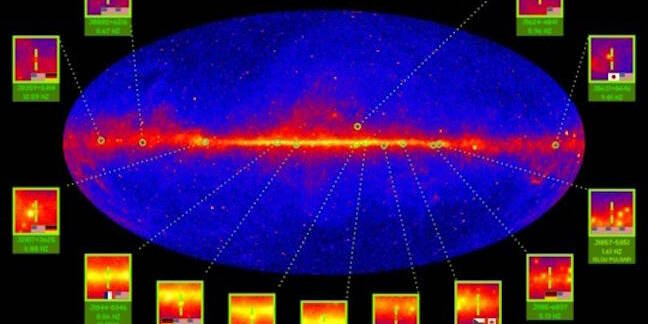 The [email protected] project has announced the discovery of 13 neutron stars in its distributed analysis of gamma ray data from the orbiting Fermi telescope.

The bunch of “young” pulsars are believed to have formed between tens and hundreds of thousands of years ago, and among them are three particular curiosities: two that are spinning slower than any known gamma ray pulsar, and one that changed rotation during the observation.

Spotting the critters at all is a challenge. As the [email protected] announcement from the Max Planck Institute explains, even Fermi's Large Area Telescope only detects around ten photons each day from the typical pulsar.

With around 440,000 volunteers taking part since the project was launched in 2005, [email protected] boasts 1.6 Petaflops of computing capacity, which would earn it a very high place in the Top 500 supercomputer rankings.

Researchers need to comb years' worth of data with fine resolution to identify new sources, and that's where [email protected] comes into play, using the kind of “spare computing cycles” approach pioneered by the far less successful [email protected] project.

[email protected] has, the Max Planck Institute says, become the go-to for “blind” searches, looking for gamma ray pulsars without data in other wavelengths. It's made all such discoveries in the last four years, turning up 21 sources, which make up one-third of the total blind-search discoveries in any survey.

The most recent study, published in The Astrophysical Journal, used 10,000 years' worth of CPU time over a year.

The scientists probed 118 candidate sources, out of 1,000 unidentified sources in the Fermi-LAT “Third Source Catalogue”, and created a new search scheme for the project “to analyse the detected gamma ray photons for hidden periodicities.”

The release notes that the slow-spinning pulsars are harder to find, because they emit fewer gamma rays than those spinning faster.

“Another newly discovered pulsar experienced a strong 'glitch', a sudden speedup of unknown origin in its otherwise regular rotation. Glitches are observed in other young pulsars and might be related to re-arrangements of the neutron star interior but are not well understood,” the release says. ®

From elephants to fish, there's no GDPR in the animal kingdom

Weight, what? The perfect kilogram is nearly in Planck's grasp

Only Russia can balls up the mass standard now

NASA: Check out this TWIRLY SPACE DWARF – and NEVER moan about our budget

Probe peeps in on icy Ceres