No amount of innovation will win over a suspicious public 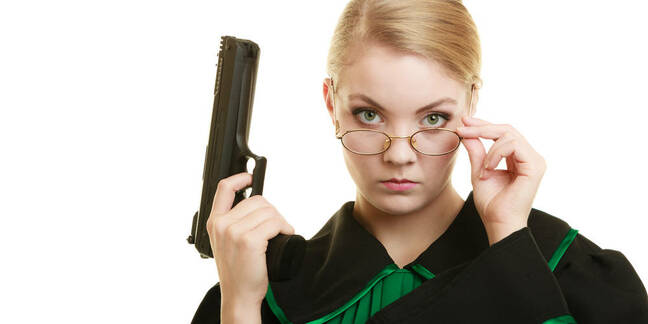 Comment A bright-eyed MIT undergraduate implausibly branded "the Mark Zuckerberg of guns" has recycled an age-old solution looking for a problem – the smart gun.

Kai Kloepfer, the undergrad lad in question, received a $50,000 grant from the American Smart Tech Challenges Foundation in 2014 to develop his idea of a Beretta pistol fitted with a fingerprint sensor.

The concept is exactly what you'd expect: people whose fingerprint isn't saved into the pistol's memory can't pick it up and fire it. The idea is superficially attractive and plays into all kinds of public safety narratives.

CBS interviewed him on Friday, with angel investor Ron Conway, a venture capitalist who backed Google and Facebook, labelling Kloepfer "the Mark Zuckerberg of guns".

Kloepfer's concept is pretty straightforward, you might think, so where's the problem?

Smart guns are almost uniquely an American phenomenon. Their history is pretty short, mainly because – thanks to hard public attitudes against the technology and its perceived potential for use by people other than the gun's owner – adoption has been virtually nil, so most products like Kloepfer's are stillborn.

This boils down to the Second Amendment to the US Constitution, which guarantees the right to bear arms. US gun ownership culture revolves around the ever-present fear, not unjustified, that organisations wielding the power of the State will try and take guns away from the general population to impose some kind of tyranny on them.

Kloepfer's smart gun works on the basis of a fingerprint reader. Press your dabs against the grip and ping! After a small delay for authentication you can blat away to your heart's content. The reader is set into the grip, so your fingers bear against it as you hold the firearm normally, and is powered by a battery.

An older but similar variation on the smart gun theme is Identilock. Instead of being integrated into the pistol, the Identilock is an external trigger lock. When you press your trigger finger to the reader, it verifies you are the owner and then drops away, exposing the trigger of the firearm.

One variation on integral smart gun tech was produced by Swiss firm Morini for their CM-84E competition .22 pistol. In that case the electronic trigger unit was locked through a key and a toggle switch to turn the trigger on and off, the idea being sold as a combination between security and ability to practise dry firing without wearing out the pistol's mechanism. The security side of the idea never really caught on, though Morini refined the mechanics of the electronic trigger as an aid to consistency and still offers it today.

Kloepfer's modified Glock features a fingerprint reader and a charging port – presumably microUSB, as his website talks of it being possible to recharge from "any cell phone charger" – and he boasts that its battery can last for up to a year. He also says that the latency between presentation of finger and boom-boom time is around 1.5 seconds – something likely to alienate people who own handguns for self-defence, on the grounds that they expect their firearms to work instantly when required. In a demonstration to CBS reporter Tony Doukoupil, Kloepfer's prototype reportedly failed to fire.

The fear among gun owners is that by adding this sort of electronic tech to their firearms, they may make their firearms vulnerable to unauthorised access by hackers (in the main we're not talking about network engineers, here) – and the principal fear is that the government will be the chief user of that access, perhaps by mandating backdoors into smart gun technology. In addition, the delay between picking up the gun and pulling the trigger could prove fatal; as an old American saying goes: "When seconds count, the police are minutes away."

It's a bit of an appendix, sadly

New Jersey led the US charge to force adoption of smart gun tech. In 2002 local legislators passed a law stating that within three years of any smart gun being sold in America, all guns sold in the state would have to be fitted with smart user ID technology. The resulting consumer backlash and boycott halted smart gun efforts by big manufacturers in their tracks and ensured that that provision was never activated.

As a direct result, there have been no advances in what advocates have dubbed a life-saving technology.

The US NRA, well known for its stance on anything that might be used to infringe the Second Amendment, says on its website: "The NRA doesn't oppose the development of 'smart' guns, nor the ability of Americans to voluntarily acquire them. However, NRA opposes any law prohibiting Americans from acquiring or possessing firearms that don't possess 'smart' gun technology."

The obvious upside to a smart gun is access control. Kloepfer told CBS: "I learned that every 30 minutes in the United States on average a child dies or is injured by a firearm."

While both sides of the American gun control debate produce statistics and then argue about their validity, there is no disguising the sheer number of deaths from firearms in the US, many of which seem to occur as a result of someone who shouldn't have a firearm getting their hands on one. Absent any legal changes making it harder for the untrained to get their hands on firearms, it is natural that public thinkers look to technology for a solution.

Unfortunately, the main obstacle to smart guns is consumer willingness to adopt the technology; without that, all the good intentions and product demonstrations in the world won't get it to take off. Governmental regulation is likely to be ignored and sidestepped, particularly in a country with millions and millions of non-smart guns already in circulation.

Technology is good but it can't meet all of society's needs. ®

Roses are red, gave Violet pick 'n' mix. She didn't like the milk bottles. Now back to ethics

While you're at it, let's have some specifics on what you tell police about facial recog tech