New VMs will use over-provisioned RAM reserved by other apps 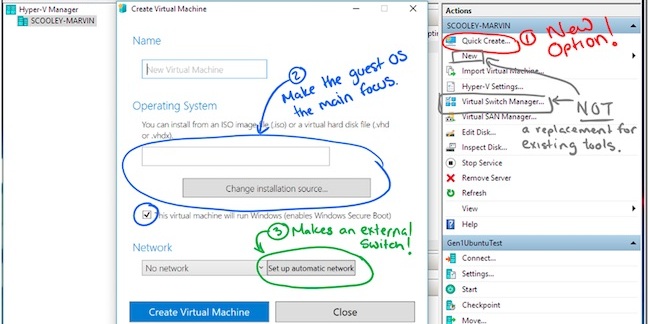 The Register's virtualization desk is back from holidays, just in time to report changes to desktop Hyper-V before they go completely stale.

Desktop Hyper-V is a Windows 10 feature that offers users the chance to create and run virtual machines on the Windows desktop, a task for which plenty instead turn to Oracle's free VirtualBox or VMware's Workstation.

Microsoft hardly promotes desktop Hyper-V and it's not enabled by default, which is fair enough given that its main market is developers. But that hasn't stopped it giving the tool a couple of new features in Windows 10's Insider build 15002.

The most interesting change is some new memory management jiggery-pokery that Microsoftie Sarah Cooley describes as follows:

In the past, when you started a virtual machine, Hyper-V allocated memory very conservatively. As an example, we maintained reserved memory for the Hyper-V host (root memory reserve) so even if task manager showed 2 GB free memory, Hyper-V wouldn’t use it for virtual machines. Hyper-V also wouldn’t ask for applications to release unused memory (trim). Conservative memory allocation makes sense in a hosting environment where not many applications run on the Hyper-V host and the ones that do are high priority – it doesn’t make much sense for Windows 10 and desktop virtualization.

In Windows 10, you’re probably running several applications (web browsers, text editors, chat clients, etc) and most of them will reserve more memory than they’re actively using. With these changes, Hyper-V starts allocating memory in small chunks (to give the operating system a chance to trim memory from other applications) and will use all available memory (no root reserve). Which isn’t to say you’ll never run out of memory but now the amount of memory shown in task manager accurately reflects the amount available for starting virtual machines.

All of which sounds like it could be of use to Windows 10 users even if they don't run Hyper-V.

There's also a new “quick create” tool for new virtual machines that offers the opportunity to create a virtual switch that's virtually outside the new VM. This feature's still under “active development”.

There's no word on when these features will make it into a stable build, or a full release like the forthcoming Windows 10 Creators Update. The latter is due in the northern hemisphere's spring, so probably the second quarter of 2017. The Register reckons developers deserve to be classified as “creators”, so perhaps these new virtual features aren't far off.

While we're talking things virtual and Microsoft, the company has also reminded users that support for System Center Virtual Machine Manager 2007 will expire on January 9, 2018. Redmond's suggested action is migration to a newer version. ®