AI and robots? Will someone think of the jobs, says HPE CEO Whitman

Yeah, just don't worry about the 100k plus you've tossed on the bonfire Meg 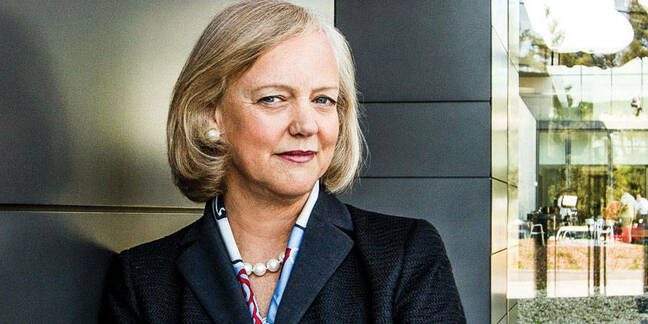 Cynics might say Hewlett Packard Enterprise CEO Meg Whitman is on thin ice when discussing job preservation in the era of AI and robotics given her own track record, but that was the thrust of her speech at Davos.

Business tycoons and global politicos swooped on the the highest town in Europe this week to attend the World Economic Forum, and HPE’s perennial cost-cutter was on hand to lend her wisdom to proceedings.

Whitman said the commercial and academic worlds will need to work together to address the decimation of jobs worldwide as technology displaces humans.

“Think about the current technology we have and add robotics, more automation, artificial intelligence,” she said at a new conference.

AI will be billed as the panacea for some of humanity’s biggest challenges in areas including climate change, medicine and agriculture but it would result in people losing their jobs too.

Whitman, who also acknowledged the election of Donald Trump in the United States and the UK's decision to "Brexit" as indications that many folk in the US and UK respectively weren’t happy with globalisation, said it was “up to business and academia to manage the transition”.

Never mind future advances in tech; during the past five-plus years at HP, Whitman has single-handedly wiped out around 90,000 jobs at the firm in her "turnaround" of the listing corporate giant. These were redundancies but others left or are leaving via divisional sales.

The company is now almost unrecognisable to the one she inherited, with the PC and print businesses spun out, Enterprise Services spun out in a deal with another caring corp CSC, and the Software division spun out to Micro Focus.

Just imagine what the next decade or two could hold, and not just for HPE. ®