It's back to the future for the latest Seagate large form factor disk with a low capacity.

The company has introduced a 3.5-inch 1TB and 2TB disk drive spinning at 7,200rpm with a slow 6Gbps SATA interface, and called it an Enterprise Capacity drive.

Remarkably, other 3.5-inch Enterprise Capacity drives of Seagate's go up to 8TB when air-filled, and 10TB when helium-filled, and have much faster 12Gbps SAS interfaces. What gives?

The new drives use ninth-generation PMR recording and are aimed at a market niche that needs an entry-level, small-capacity drive in the 3.5-inch format, not the 2.5-inch one. It's a cheap (we assume; no prices supplied) and cheerful spinner with a 128MB cache, 194MBps transfer rate, two million hours MTBF rating, five-year warranty, and supports 24x7 workloads of 550TB per year.

That's 10 times a desktop drive's workload. Seagate says the drives are built specifically to address the entry-level bulk data needs of system architects, sales engineers and owners of small to medium-sized businesses, and suggests these application areas could use it: 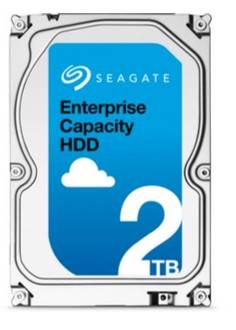 When we read "High-capacity density RAID storage" in this list we thought Seagate might be being ironic but, presumably, it's done its market research and there is sufficient demand for a drive of this type.

As far as price goes, Seagate talks about this enterprise-class nearline bulk data storage drive having the lowest possible cost structure for up to five years, which encourages us to think it will be good value.

One possibility that has been mentioned to us is that Seagate is merely listening to a large vendor’s request for a very cheap HDD – slow, but with relatively good reliability. If true, Seagate will have delivered. ®