Instead we're getting version '11.next', 'SPARC.next' and a Big Red SPARC IaaS

In late 2016, The Register received credible-but-ultimately-unverifiable reports that Oracle was scaling back Solaris development, perhaps with significant sackings. We chose not to publish because Oracle denied the specific allegations we'd received.

We’re aware of rumours about the demise of Solaris. Our best efforts have not been able to verify the rumours. Oracle has denied it 1/3

A user tells us Solaris will be moved to maintenance mode and resources moved to Linux. That’s not quite enough for us to do a story 2/3

One of our sources is personally familiar with the dev Solaris team. If you know more, feel free to let us know news@theregister.co.uk 3/3

Now the company has published a new roadmap showing that there will be no Solaris 12.

The new blueprint [PDF, or here on our servers if Oracle takes it down] – dated January 13, 2017 – omits any word of Solaris 12 that Oracle included in the same document's 2014 edition, instead mentioning "Solaris 11.next" as due to debut during this year or the next complete with “Cloud Deployment & Integration Enhancements." 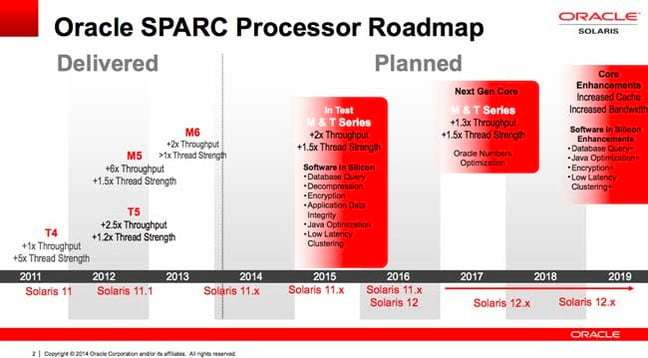 Oracle's SPARC and Solaris roadmap from 2014

At the time of writing, search engines produce no results for “Solaris 11.next”. The Register has asked Oracle for more information. 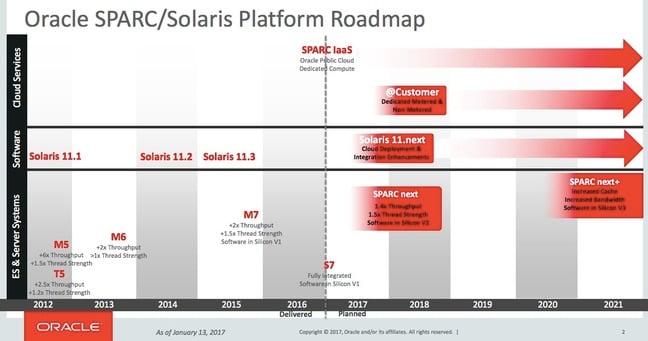 There's also hints of a plan to launch SPARC infrastructure-as-a-service, probably under the brand “@Customer” with services in “Dedicated Metered & Non-Metered” form.

What does this all mean? At a guess, Solaris is not going to get a full new version, but will be enhanced and will be supported for many years to come. There's also going to be a SPARC-and-Solaris cloud that Big Red will rent by the hour or offer on other, more permanent, terms.

We've asked Oracle to explain itself: if it comes back with anything useful, we'll let you know. In December, Oracle waved off suggestions that layoffs were looming and that Solaris 12 had been cancelled.

While we wait, here's an interesting nugget from Hong Kong's South China Morning Post, which followed up news from China of 200 redundancies at Oracle's Middle Kingdom operation: Bill Nesheim, a veep of Oracle's China outpost, told the Post “Oracle is refocusing more R&D effort on cloud computing ... Due to this restructuring, some product teams in some markets will be eliminated.” ®

Bootnote: A reader has offered us what looks like a quote of material Oracle has sent to customers, here.