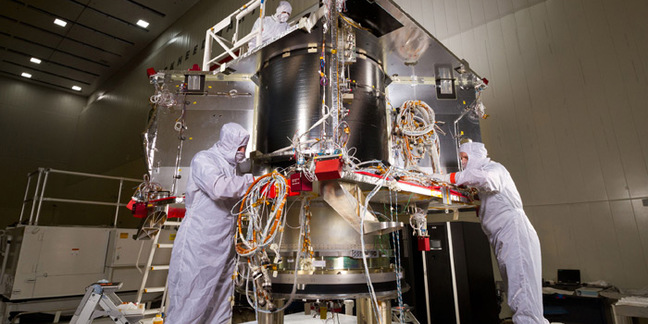 NASA's asteroid-exploration mission OSIRIS-REx spacecraft has taken the left turn at Albuquerque on its way to a near-Earth space rock called Bennu.

The agency says the burn of 354 kg of fuel (780 pounds) boosted the craft's velocity and put it on a trajectory for an Earth fly-by which will give OSIRIS-REx impart even more speed. That fly-by is set for September.

The most recent manoeuvre took place on December 28, 2016, and was the first big burn for the spacecraft (it's designated Deep Space Manoeuvre 1, DSM-1). NASA says the Deep Space Network (DSN) collected tracking data showing it went well, and “subsequent downlink of high-rate telemetry from the spacecraft shows that all subsystems performed as expected”.

NASA Goddard's deputy project manager Arlin Bartels said: “DSM-1 was our first major trajectory change and first use of the main engines, so it’s good to have that under our belts and be on a safe trajectory to Bennu.”

The craft launched in September 2016, and is due to rendezvous with Bennu in 2018.

Top of OSIRIS-REx's science mission is to take a 2.1-ounce (about 60 grams) sample of Bennu and return it to Earth in 2023. It will also gather spectral information for comparison with Earth observations, and map the chemistry and mineralogy of the asteroid.

Its Regolith Explorer (the REx in the name) will observe texture, morphology, geochemistry and spectral properties of the asteroid's surface.

To help provide information about near-Earth asteroid movements, OSIRIS-REx will also take close-up measurements of the Yarkovsky Effect. As the mission's NASA page explains, this is “the force caused by the emission of heat from a rotating asteroid that can change its orbit over time”. ®