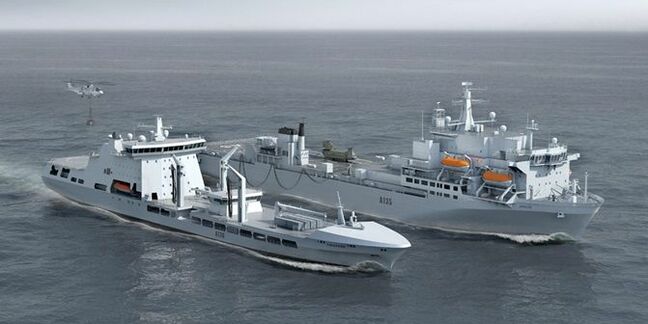 Tidespring was formally named at Daewoo Shipbuilding & Marine Engineering’s (DSME’s) Okpo-dong yard on 7 October 2015, according to the Ministry of Defence.

“With the naming of RFA Tidespring, the Royal Navy looks forward to another new arrival into our future fleet,” said Admiral Sir George Zambellas, the then-First Sea Lord (head of the Navy).

Since then, Tidespring has basically sat in the yard doing little more than collect seagull droppings, barring her post-build sea trials.

The MoD has been exceptionally tight-lipped as to the reasons for the delay in delivery even though the ship was completed a year ago. The official explanation given to US website Defense News was that cable insulation standards had changed between the contract being placed and the planned delivery date. The ministry also claimed that the £452m contract for the four ships had not increased in price as a result of the delay.

Tidespring is a fast fleet tanker. Essentially a floating petrol station complete with shop, her main duty is supposed to be refuelling Royal Navy and allied ships on the high seas. In addition, she is capable of carrying dry stores and fresh water, along with jet fuel for the Queen Elizabeth-class aircraft carriers.

Navy News, the official organ of the RN, said in 2013 that the first of the four new Tide-class fleet replenishment tankers “is due to be handed over to the MoD in October 2015.”

Navy News also helpfully quoted naval architect Mark Lewis, from the RN’s Future Tanker Project team, as saying: “A Range Rover’s fuel tank connected to all four 7-inch hoses on the starboard side of a Tide tanker would be full in 0.12 seconds. Unfortunately, the fuel would be passing through a standard petrol station’s nozzle at around Mach 2 – and completely destroy your vehicle.”

The Register is open to any suggestions as to how to practically test this vision of future supersonic refuelling excellence.

All of the Tide-class tankers are being built by South Korean shipyard DSME. No British yards bid for the contract, as all available UK shipbuilding capacity was in use building sections of the Queen Elizabeth-class carriers. This date then gradually slipped to “spring 2016,” at which point the tanker was supposed to be in Plymouth to be fitted with specialised British naval equipment.

Unlike Royal Navy warships, RFA ships are manned by the Royal Fleet Auxiliary. Although a uniformed naval service of the Crown, the RFA is a civilian service. Employing just under 2,000 British merchant navy officers and sailors, the RFA operates 13 naval auxiliary vessels in support of the RN. Though those ships are also nominally civilian vessels, they carry NATO pennant numbers, along with light machine guns and anti-aircraft armament. The latter is operated by an embarked contingent of RN sailors and Royal Marines.

RFA ships go through the RN’s Flag Officer Sea Training department on training courses that are very similar to the ones actual warships must pass in order to be eligible for deployment. In recent years, RFA ships have been deployed on naval tasks traditionally reserved for actual warships: for example, RFA Wave Knight spent several months on Atlantic Patrol Task (North), patrolling the Caribbean with an embarked helicopter and a US Coastguard boarding team. ®