Trump lieutenants 'use private email' for govt work... but who'd make a big deal out of that?

Wasn't there some issue about Hillary doing this? Nah 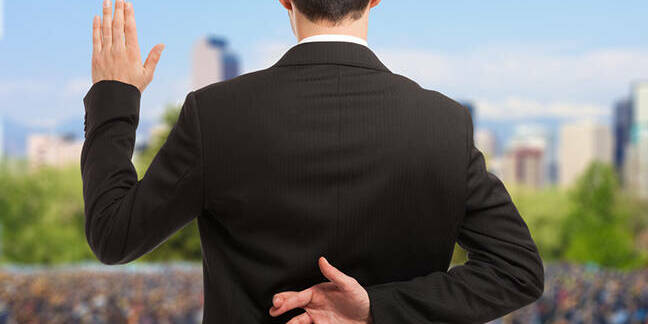 Senior members of the Trump administration have been accused of blatant hypocrisy after it was revealed they are continuing to use personal email accounts.

Key advisors to the president, Kellyanne Conway and son-in-law Jared Kushner, as well as press secretary Sean Spicer and chief strategist Steve Bannon, all have accounts on the Republican Party's rnchq.org domain, and are continuing to use them in addition to their official government accounts, according to Newsweek.

It's not known whether the top lieutenants are using the accounts to discuss White House business outside official channels, but the fact that the accounts exist and are being used is remarkable in the face of what was one of the most persistent attacks by the same group on presidential candidate Hillary Clinton – that she had used a personal email system to carry out government business.

In Clinton's case, the Trump campaign made huge play of the fact that over 30,000 emails on the personal server were not handed over to a Congressional committee looking into the affair, with President Trump often leading chants of "lock her up." Ultimately, no action was taken against Clinton.

We note that the same rnchq.org domain was used by members of the Bush Administration, who were heavily criticized for having "lost" no fewer than 22 million emails when asked to hand them over to the presidential archives. It is also strongly suspected that the same domain and email server were compromised by Russian hackers during the latest presidential campaign.

There is nothing illegal in White House staffers using personal email accounts, but they are expected to forward any that pertain to official business to their official government account within 20 days so they can be archived. The Obama Administration set firm guidelines on the use of such accounts, with staffers told to ensure, as far as possible, to only use official accounts for work purposes.

There are, basically, two issues at play here. One, it's feared private systems are more open to attack by hackers, and two, work carried out for or on behalf of the American public must be open to public scrutiny, not locked away on secret servers.

Whether the current crop of White House staff has decided to be as conscientious or whether they consider email policy to be another of the official policies they are not obliged to follow, only time will tell. Either way, it is just one more ethical concern laid at the doors of the new administration. ®

Chinese chip giant calls on US tech to help out with Trump tariffs – not a quid pro quo, obviously