It's a grim week of remembrance for America's rocketeers

The three were running a test of the capsule on January 27, 1967 ahead of its first flight the following month, with the astronauts strapped in and running the machine on internal power only. The capsule was flooded with pure oxygen and sparks from exposed circuitry ignited the gas.

The fire was fierce and raised the air pressure in the capsule, making it impossible for the astronauts to open the pressure hatches and get out. All three were killed by asphyxiation and it was a long time before NASA engineers could put out the blaze and recover their bodies.

The accident was a crushing blow to the nascent space program and it was nearly 20 months before it resumed, after NASA and the government had found out what went wrong. 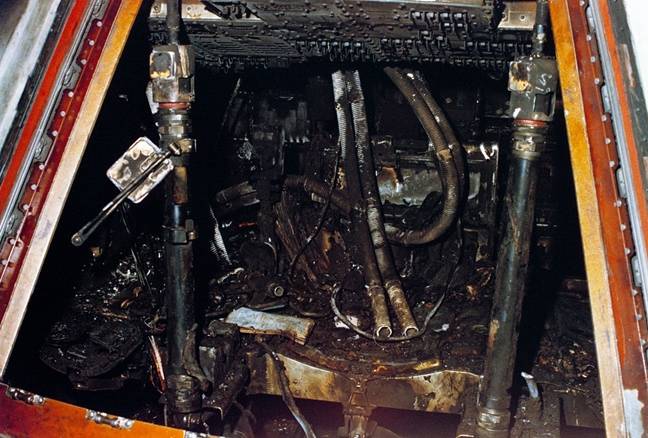 Gutted ... the remains of the capsule

The investigation found that the capsule was full of inflammable material and sparking silver wires, that ground staff didn't have firefighting equipment, and that pure-oxygen atmospheres are needlessly dangerous.

It also robbed the agency of some of its more experienced astronauts. Grissom was a member of the original Mercury crew and nearly died on his suborbital flight when the hatch of his capsule popped off on landing. He was also the first astronaut to make it into space twice, after his successful Gemini flight.

White, meanwhile, was the first American to take a spacewalk in orbit as part of the Gemini 4 mission. He enjoyed it so much that he had to be ordered back into the capsule. "I'm coming back in... and it's the saddest moment of my life," he said.

Their deaths weren't in vain, however. They prompted a policy in NASA of safety first that has persisted to this day. The agency is recognized the world over as the most careful and risk-averse space agency in the business.

Sadly though, sometimes it is not enough. The end of January contains grim anniversaries for NASA, since its three worst accidents coincidentally all occurred between January 27 and February 1, a six-day statistical oddity that still puzzles some.

On January 28, 1986 the Space Shuttle Challenger ran into trouble one minute into flight when an O‑ring on one of the solid-fuel boosters failed, causing it to swing and ignite the main tank. The seven astronauts aboard were all killed, including the first "citizen astronaut," school teacher Christa McAuliffe.

Thirteen years ago on February 1, 2003, it was the turn of the Space Shuttle Columbia to fail, this time after frozen foam knocked off some of the spacecraft's heat-resistant tiles. NASA assessed the situation and judged the vehicle safe for its return flight, but the tiles let in superheated air during reentry at Mach 18 and the shuttle disintegrated.

On January 31, NASA will hold a special day of remembrance to honor its fallen heroes, and the others who have died for mankind's quest to leave the nest and go exploring. As the adage goes, space is hard, but each death reasserts the drive to do it better and safer. ®