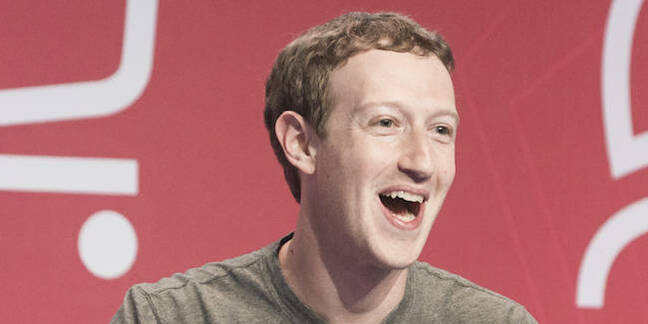 Comment Mark Zuckerberg is the world's fifth-richest man on the basis that stock markets think he's pretty smart. That's not the entire reason for Zuck taking his place alongside Gulf oil sheikhs – but it's certainly a big factor in Facebook's astronomical evaluation. But this week's Facebook strategy insights make you wonder how smart he really is.

Specifically, does he have a realistic idea of what Facebook's value actually is? And does he even know what "value" is? It's the word that means everything and nothing; but a man so apparently keen on learning and self-improvement seems to have a blind spot.

The Wall Street Journal tells us that Facebook wants to enter the TV space. Traditionally, value here is gleaned from either creating great content, or from creating technology that makes that content easier to consume, or even more spectacular. Long-playing records, Technicolor and the iTunes music store all fall into that latter category. Today, cord-cutting is making more content available at scale than ever before, and we have a "Golden Age" of TV. So where does Facebook think it can fit in?

Facebook's challenge is slightly different. Facebook does neither content nor technology. By which I mean Facebook has no technology that makes media more fantastic or convenient. It actually owes its position to a curious historical fluke. The development of open internet standards, like email, ground to a halt shortly after the public gained access to the internet, and Facebook found itself in the right place at the right time: bundling a bunch of proprietary (and easily copied) new communication tools instead.

What Facebook does is advertising, and it wants to insert itself in a value chain that is dispensing with traditional advertising. The cord-cutting world is dragging traditional TV along with it, and heading towards a world of prepaid content subscriptions. These are proliferating like Topsy. In fact, the collision of telcos and media companies is propelled by the optimistic idea that people prefer billing simplicity over choice. However that story pans out, there's really little indication that TV and movie consumption needs to be ad supported today. In short, Facebook's desired role is essentially that of a middleman who nobody wants or needs.

For sure, there's still a role for advertising agencies, albeit a diminished one. But ad agencies now trade on cross-platform scale: buy a campaign across many media channels. Even then margins have to be spread across multiple players.

The WSJ tells us that Facebook is apparently developing a set top box (why?) and midroll adverts (why?). In addition, Facebook is dipping a tentative toe into "long-form content", which is defined as video clips "upward of to 10 minutes in length" (for us, ten minutes is a blip, but apparently for millennials that's a full-length Stanley Kubrick).

Pray tell me, dear reader, what a "Facebook TV" box could give you that a Firestick or an Apple TV or a Now TV box doesn't?

One wonders why Facebook needs to dabble here in AV at all. Surely Facebook's best bet is to be the "third screen": complementing TV, rather than trying to plug into TV's ecosystem. Perhaps it really hasn't got a clue at all. ®