Even in rural Australia, sharing is resisted

Analysis The advantages of network sharing seem glaringly obvious in a world where the mismatch between mobile data demand and mobile data ARPU is rushing MNOs’ profits. The need to reduce the cost of delivering those rising tides of data is urgent, but many operators are ready to discuss almost any tactic – Wi-Fi offload, automation, outsourcing, even an early move to more spectrally efficient 5G radios, or an outright merger – rather than consider sharing the RAN load with others.

So will that reluctance to lose control and "enable the competition" end up weakening the 5G business case, delaying deployments and letting non-MNOs, with a more open approach to infrastructure, into the market?

Even in the rising number of markets where regulators permit sharing of active network equipment, the level of RAN sharing remains low (by contrast, there is significant willingness to share passive infrastructure such as towers and transport links). For every operator which has pushed ahead with RAN sharing, such as the UK’s big four, there are several others which reject the notion. This month, AT&T was the latest to argue against the idea that building three or four 5G networks per country would be the only way to get 5G rolled out.

The US operator’s chief strategy officer John Donovan told the AT&T Developer Summit, held on the sidelines of the Consumer Electronics Show, that “the potential to do a big quality degradation is too high” to justify RAN sharing, especially when 5G is being built out in high frequency spectrum, where signals have short range and there is high potential for interference. He argued that the risk of an impact on quality of service would not be justified by “an economic benefit that's unknown and not that big”.

He claimed that there is little evidence that existing RAN sharing arrangements, such as those in some European countries, have resulted in significant cost savings or market gains.

Donovan was referring mainly to a specific use case in emerging millimeter wave spectrum, but his more general comments about quality risks and unproven cost savings go to the heart of many operators’ resistance to sharing. Yet, as many start to pursue new network architecture strategies, such as densifying with large numbers of small cells, and virtualizing baseband processing in a Cloud-RAN, the case for sharing the load is likely to become more pressing.

In the former case, for instance, calculations by Rethink’s RAN Research service concluded that, if the percentage of small cell networks which are multi-operator or neutral host stayed at its current level until 2020, the installed base of non-residential small cells could be more than 4 million units, or 32 per cent, smaller than indicated in current forecasts which assume a rising level of multi-operator support.

Even though shared networks involve fewer cells than multiple single-operator ones, nevertheless the total deployments would be lower because so many networks would not be commercially viable without sharing or neutral host (where an external party builds and runs the network and the MNOs act as tenants).

The sheer number of sites, backhaul links and power sources which would be required to support multiple dense networks in the same place would mitigate against this and make a clear argument for a single, shared network, whether built by one of the MNOs, a joint venture between several MNOs, or a neutral host.

Where none of those shared approaches can be agreed, there will often be no network at all. Densification will be reduced or abandoned in favour of other methods of increasing mobile capacity, such as Wi-Fi offload or new spectrum; or some areas, particularly rural and in-building, will go without decent coverage and capacity.

Risks like these lurked behind former FCC chairman Tom Wheeler’s words late last year, when he told a conference that there are just over 200,000 cell towers in the US, but there may be “millions of small cell sites in the 5G future”, making it essential that the industry “think creatively about smart solutions to the deployment of the antennas necessary for 5G to benefit the public”.

He added: “To be clear, I’m not endorsing shared infrastructure in every and all circumstances, and certainly not opening a door to consolidation. But I am saying that if we’re talking about thousands of antennas in a city, and you’ve got four carriers, and we are serious about leading the world in 5G deployment in our very large and spread-out country, we ought to explore creative options on how best to build that infrastructure.”

Despite the obvious sense of such words, MNOs like AT&T remain protective of their control over their networks and how they deploy and monetize them. In a survey of over 40 mobile operators which Rethink conducted in mid-2016, the reasons for MNOs’ suspicion of RAN sharing emerged. Although the survey related mainly to small cells, many of the issues apply to the macro network too.

The primary issue is that MNOs see too little incentive to participate in building a network which will, in the view of many, just "enable their competitors". While most MNOs have embraced the MVNO model to increase and diversify their revenue streams, few go as far as to share their networks or spectrum with direct MNO rivals beyond roaming deals, unless mandated to do so by government.

As Nick Johnson, CTO of small cell vendor ip.access, put it, multi-operator networking “essentially opens the door to a free-for-all in terms of resources. There’s no commercial benefit to the first mover. All the first mover does is open the door to their competitors. So there are no first movers.”

The Rethink survey found that the need to take the upfront capex burden, and uncertainty about the ROI, are the most important barriers deterring MNOs from sharing networks. Other factors which were commonly cited included fear of enabling rivals (a top three concern for over half of respondents); concerns about differentiation from those rivals (38 per cent); and issues of network congestion (32 per cent).

They also have qualms about being tenants on a network hosted by another, even a neutral third party. Here, the concerns are also centred on uncertain monetization models (placed in the top three by 51 per cent of MNOs), as well as the risk of having limited control over quality of experience (45 per cent), or over differentiation (38 per cent) and lack of control over QoE (32 per cent).

When it comes to Cloud-RAN, there will be even more fundamental decisions to make. The more pure – or extreme – interpretations of C-RAN will see very stripped-back cell site equipment, so it may become more practical for each operator to have their own, though there will still be site issues when those cells are small. The bigger decision will be whether operators will own and run their own cloud infrastructure; share those data centres with others; or have their virtual RANs hosted by third party cloud giants.

For now, though, most operators are concentrating on their current architectures and the pros and cons of sharing a 4G macro network. One of the factors which will drive sharing, of course, will be government pressure or even mandates. Some countries have sought to speed up LTE availability by backing a wholesale, shared network, or forcing existing operators to band together in rolling out 4G.

These schemes have had mixed results. A plan for a neutral host LTE network in Russia, to be funded and shared by the three major MNOs and the wireline incumbent Rostelecom, fell apart amid wrangling between the stakeholders – finally one of the MNOs acquired the neutral host and all the operators built their own 4G systems. Shared or wholesale network plans in Kenya and South Africa ran up against political opposition and unwillingness by MNOs to surrender control over their timescales, investment levels and QoS. 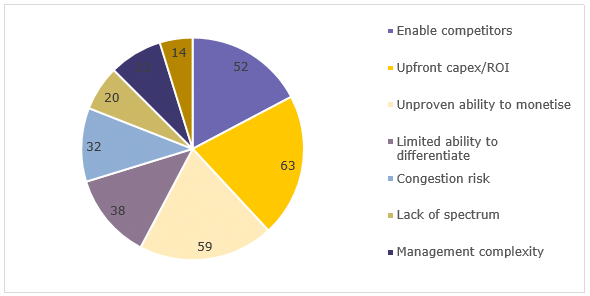 One of these government-mandated schemes which is coming to fruition is in Mexico, where regulator Promtel last week signed a public-private partnership deal with Altan Redes, which will roll out LTE infrastructure, in dedicated 700 MHz. The network is expected to cost around $7bn and Altan has promised to cover 92.2 per cent of the population, more than the 85 per cent minimum target specified in the tender. The network must begin commercial operations no later than March 31 2018, and will cover 30 per cent of the population at launch.

The agreement was delayed and mired in controversy, but now it is signed the wholesale national network could open the market to new competitors to operate alongside the existing 4G providers, notably America Movil, AT&T and Telefonica.

Altan Redes, a consortium led by funds owned by Morgan Stanley, the World Bank and Spanish businessman Eugenio Galdon, won its 20-year licence to deploy and operate the network, called Red Compartida, in November, beating the only other bidder, Rivada Networks, which was disqualified for allegedly failing to provide necessary financial guarantees. Rivada is still disputing that decision and recently argued that, since the Chinese government indirectly holds 23.6 per cent of Altan's equity, the PPP is in violation of the rules which bar ownership of Red Compartida by foreign governments.

Despite these wrangles, there are hopes that Red Compartida will introduce new competition and services to Latin America’s second largest telecoms market, where innovation has been limited by the stranglehold of incumbent America Movil. The dominance of that company has been attacked in the past two years by a new regulator, which has forced the firm to divest some assets, and by the entry of AT&T. And now the wholesale network could support new service providers such as cablecos, as well as MNOs, or could enable AT&T – which acquired two smaller mobile carriers, Iusacell and Nextel – to extend its capacity (its purchase of DirecTV also brought some Mexican activities).

However, the biggest challenge will be the difficulty of competing with established incumbents – especially with a network which will not even start service for another 16 months – if the MNOs do not choose to use the wholesale system alongside their own. If cablecos and other providers get sufficiently interested in multiplay services, there should be rising custom for a wholesale network, but in many areas it is tough to make a business case for investing billions of dollars if the MNOs do not become clients in their own right. The length of time for new entrants to generate significant revenue, and their small market share, are significant barriers to breaking down the role of the established majors with their long history of investment in tightly controlled RANs. And in most cases they are reluctant to weaken that control, even in the interests of slashing their capex and opex budgets.

The shared network may also be too little too late, and the tortured process of awarding the contract has highlighted the barriers to the government-mandated wholesale or sharing approach. The government often gets involved in a bid to bridge the digital divide, especially in rural areas. In these areas, the case for sharing seem even more obvious, since it is hard to justify the cost of building a fully fledged mobile broadband network for a sparsely populated, hard-to-reach neighbourhood.

Next page:
StarHub and M1 to share networks in Singapore Singapore is about to get a fourth mobile operator, Australia-based TPG, and the second and third players, StarHub and M1, are preparing for new competition by considering a network sharing deal.

StarHub CEO Tan Tong Hai said: “We are cooperating to bring the Singapore infocomm industry to the next level, to compete not on pure infrastructure ownership, but at a higher level of customer service and innovative value creation.”

“Sharing mobile network radio elements with M1, but keeping our individual mobile core networks, will allow StarHub to provide better mobile service (in particular, mobile coverage) and still be able to differentiate ourselves.”