Pics Mars is not quite the featureless red wasteland scientists once thought it was. New images from the European Space Agency’s Mars Express probe orbiting the Red Planet have revealed delicate swirls of ice at the alien world's north pole.

The idea that Mars may be capable of harboring life has fueled the space industry’s obsession. There are currently eight operational missions to the Red Planet – a mix of orbital, lander and rover types.

The image of its north pole was generated over six years from 2004 to 2010. It’s a mosaic pieced together by 32 individual orbit “strips” taken as the spacecraft whizzed around the planet and measured an area of around a million square kilometres (386,100 square miles).

Both poles on Mars are permanently covered in frozen ice caps. In the winter months, the plummeting temperatures make it cold enough for 30 per cent of the carbon dioxide in the planet’s atmosphere to freeze, adding a layer of ice onto its poles. 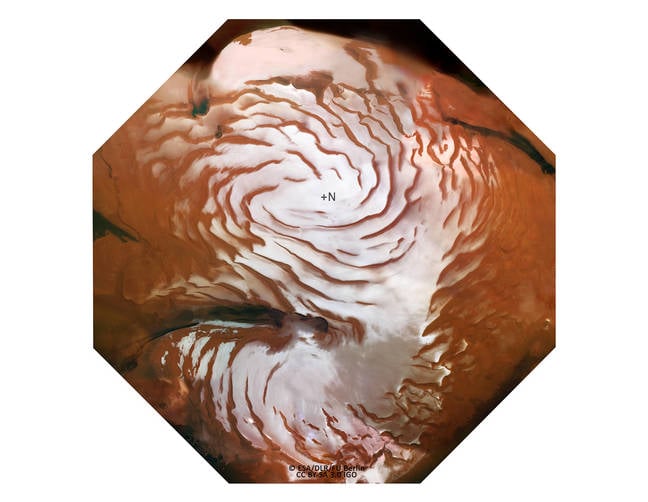 The swirling nature is believed to come from the strong winds bellowing from the centre of the ice cap and towards its lower edges. The Coriolis effect whips the wind and causes it to twist into the spiral shape, like hurricanes on Earth.

A closer inspection reveals a deep channel carved into the north pole, breaking up the twisting pattern of the ice.

Scientists have named the 2km (1.2mi) deep and 500km (310.7mi) long canyon Chasma Boreale. It’s a relatively old structure on Mars’ surface, tunneling deeper as the ice continues to grow around it.

The number of missions to the Red Planet will continue to rise as scientists prepare for the ultimate target: human spaceflight. ESA recently received funding for the rover stage of its ExoMars mission despite its Schiaparelli probe failing miserably back in October last year.