A non-Standards Soviet approved measure of weight? Sod off, BBC!

An eagle-eyed Reg reader has spotted a dastardly BBC attempt to muscle in on the Reg Standards Soviet’s turf – by devising a new and highly unauthorised measure of weight.

In an otherwise unremarkable story from last week about construction of the Queensferry Crossing bridge between Edinburgh and Fife being completed, the Beeb noted: “The steel required for the bridge deck weighs a total of 35,000 tonnes - equivalent to almost 200 Boeing 747s.”

The corporation’s unnamed writer then went on to say, without elaborating: “The combined steel required for North and South viaducts weighs 7,000 tonnes - enough to make another 23 Kelpies.”

So what, exactly, is a Kelpie?

“The Kelpies are an art installation not too far from the new bridge,” said Reg reader Mike Bonner, who told us about this horrendous breach of Standards Soviet protocol. 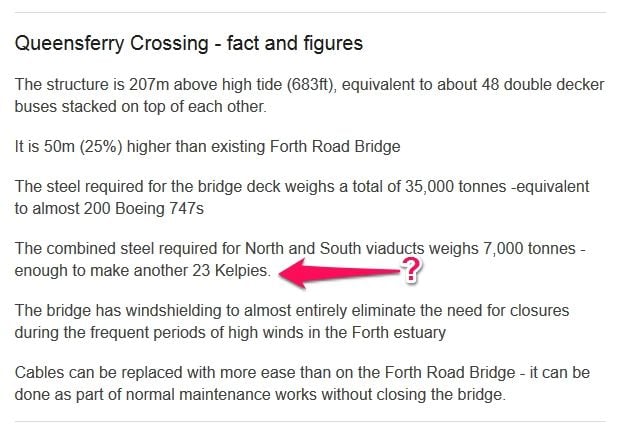 But what are they, o wise Beeboid?

As Mike says, the kelpies that the BBC are talking about are 100ft high steel sculptures fashioned after the carthorses that used to infest the local area. Put together by Glasgow School of Art sculptor Andy Scott, each of the two horse’s heads was designed to weigh 300 tonnes.

In Scottish mythology a kelpie is “a shape-changing aquatic spirit” that haunts rivers and takes the form of a horse or a pony. Children are particularly vulnerable to the mythical beasties, which in their equine form cause inquisitive kids to stick to them, so the demonic donkey can drag them into local rivers and drown them.

They can also take the form of a beautiful young woman or become a “hairy human” which crushes lone travellers to death in a vice-like grip, the two presumably being separate incarnations.

Apparently captive kelpies have the strength of 10 horses, about the same power output as the world’s oldest surviving Rolls-Royce.

As for the Beeb’s attempt to claim the Kelpie as a unit of weight? 1,666 KiloJubs say “bugger off”. ®