Terahertz transmissions, literally the last frontier of radio communications, come a step closer this week with a group of Japanese researchers demonstrating a 100 Gbps system at an IEEE conference.

The researchers, from Hiroshima University, Japan's National Institute for Information and Communications Technology, and Panasonic, are showing off kit that delivers a baseband frequency of 300 GHz.

The research group already demonstrated a 100 Gbps QAM-based (quatrature amplitude modulation) link last year. What they're showing off at the IEEE's International Solid State Circuits Conference this week in San Francisco shoves the previous work into integrated circuits, and are claiming a much higher per-channel data rate than in 2016.

There's more research yet to come, but the boffins are targeting two line-of-sight use-cases: rural broadband distribution, and satellite communications.

Both need more range than laboratory demonstrations offer (generally from metres to a handful of kilometres), but 300 GHz is well beyond the spectrum that gets absorbed by water in the atmosphere (7 GHz to 55 GHz is the ITU's designated “rain fade” band).

Terahertz communications in a nutshell

And now, back to how we can call a 300 GHz transmission “Terahertz”. Simple: that's the International Telecommunications Union (ITU) designation. That august body uses the term to cover frequencies from 300 GHz (this demonstration) to 3 THz. The definition also overlaps with the far infrared band, from 300 GHz to 20 THz.

Why so much research? – Because there's so much pressure on radio spectrum already. Consider 20 MHz mobile telephony channels (the usual chunk carriers bid for in spectrum auctions): per 100 MHz of spectrum, you get five channels.

What are the challenges? – Electronics is the difficult part. You have to be able to generate the 300 GHz-plus carrier wave, and you have to modulate a signal onto it, which pushes a lot of research into semiconductors. While Georgia Tech led an effort that switched a silicon-germanium transistor at nearly 800 GHz in 2014, that chip operated at cryogenic temperatures.

Optical transistors can switch much faster, but to create radio waves, you need to work with electricity.

Antennas are also different from what most people would recognise. You can't just shove 300 GHz into a Yagi-Uda antenna, point, and shoot. The Japanese release didn't mention the type of antenna used in the NIICT/Hiroshima Uni/Panasonic research, but by way of illustration, here's a “leaky wave” antenna demonstrated in a US/Japanese experiment in 2015. 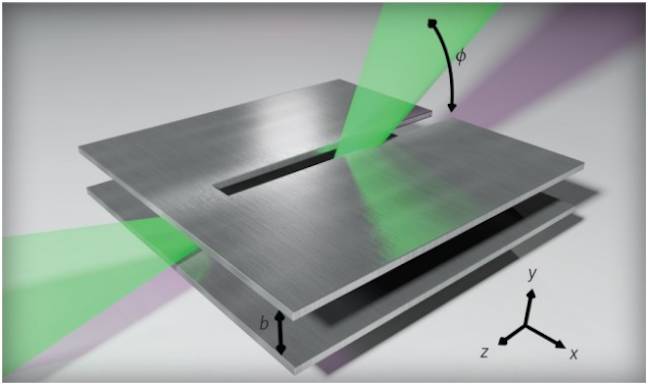 Not your ordinary Yagi: Rice University and the University of Tokyo created this leaky-wave antenna in 2015

Those researchers used the separation between the plates to adjust the frequency band they were transmitting at. The antenna scale is millimetre separations and sub-millimetre adjustments, making stability important.

Is this all for the good of humanity? No, there's a certain amount of jockeying for position going on. The International Telecommunications Union hasn't yet set the rules for the Terahertz band – that's up for discussion at the World Radiocommunication Congress in 2019. ®