Super Canucks go ballistic: Uber filter's bogus (and writing these headlines is a sign of psychosis)

A Canadian phone network says a wayward spam filter is to blame for blocking text messages that contained the word "Uber".

Mobile carrier Fido said a glitch in its software dropped any message with the four-letter word while in transit and never delivered the texts to the intended recipient.

Folks on Reddit catalogued the issue with screenshots showing how other messages were being sent and received as normal, while anything containing the word "uber" would simply vanish. 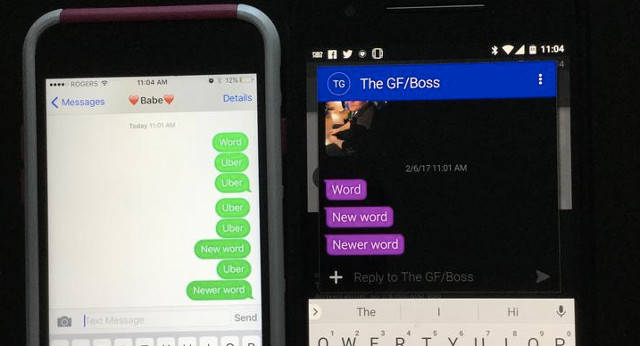 Vanished ... Users could see their messages being blocked

While the filtering mishap may have gone completely unnoticed just a few years ago, the rise of ride-sharing app Uber has put the four-letter word into the daily vocabulary of mobile phone users worldwide. Some had even speculated that the filter was part of a sort of covert campaign against Uber by Fido.

The telco says that is not at all the case.

El Reg emailed Fido's press team about the cockup, only to have the message bounced back by the telco's all-encompassing spam filter as it contained the forbidden word. We were able to get through to parent company Rogers, which confirmed that the mystery block had been solved.

"Due to a technical glitch, messages with that word were being filtered out as spam," a spokesperson said. "We've resolved the matter so it should not happen again."

We have asked Uber if it was aware of the issue or had seen an uptick in complaints, but the dial-a-ride biz has yet to respond. ®