Oh my Tosh: Bids up to $3.6bn for memory biz as deadline approaches

Reuters is all over the Toshiba memory division 20 per cent stake sale, reporting incoming bids up to $3.6bn.

The money is needed to offset a multibillion-dollar ($5-6bn) writedown of Toshiba's US nuclear power station business following disastrous overruns, and it's needed by March due to Toshiba's corporate financial and reporting arrangements.

The Memory Division is to be spun out of Toshiba's Storage & Electronics Devices Solutions as a separate company in its own right, with a 20 per cent stake in it being sold.

Interested bidders are speculated to be Bain Capital, Foxconn, Micron, SK Hynix, Tsinghua Unigroup and WD. As private equity investment funds would not excite time-consuming probing from regulatory authorities, it is thought Toshiba would favour that route.

However, WD may not be interested in bidding for the memory division business directly after all.

Stifel analyst and MD Aaron Rakers has clarified how he sees Toshiba's relationship with WD. The two jointly own a flash foundry business, with Toshiba holding 50.1 per cent and WD 49.9. 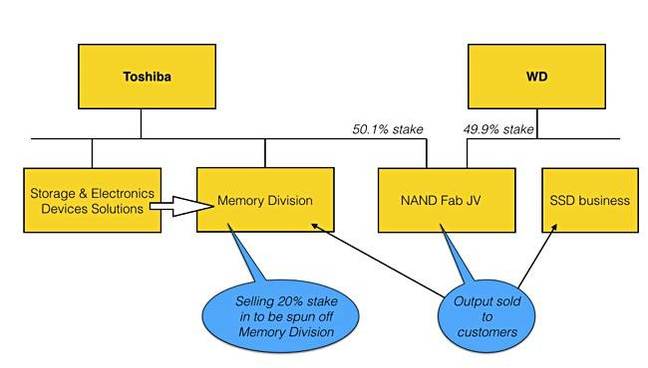 It's unlikely that any intent by WD to purchase a greater share in the joint venture would be completed anyway by the March deadline for Toshiba's money-raising efforts to deal with its US nuclear plant overruns.

Also he says Toshiba and SK Hynix announced a joint production partnership for (next-generation) MRAM in early 2014, and this would be a complicating factor in any deal with WD, which has its own, competing, ReRAM initiatives. ®