Stick glue on a drone. Fly it into a flower. World hunger solved, bee-lieve

Video A failed science experiment involving a sticky gel has been revived to create robot pollinators.

If you're picturing the robo-killer bees in Black Mirror, the ones that arrive in huge swarms to drill through the victim's eardrum to destroy the brain, then stop right now. Reality is depressing, and these droids don't look nearly as cool.

Researchers from the National Institute of Advanced Industrial Science and Technology (AIST) in Japan simply slathered goo on a layer of bristles stuck on to a tiny drone, and sent it flying into a batch of pink lilies.

A paper in the journal Chem shows the ionic liquid gel is the star of the show. It's "superwettability", "electrostatic properties", "semi-permanent adhesiveness", and "flexibility" are ideal for attracting pollen.

Initially, the magic ingredient was a flop. Eijiro Miyako, paper co-author and chemist at AIST, wanted to create liquids that could conduct electricity. A test batch generated a substance with a consistency like sticky hair wax, which Miyako stored away in a cabinet, to be left untouched for almost a decade.

The uncapped bottle containing the gel was rediscovered during a lab cleanup; its consistency hadn't changed. Worries over the decline of honeybees made Miyako explore the idea that the sludge could be used to aid the pollination process.

"This project is the result of serendipity," said Miyako. "We were surprised that after eight years, the ionic gel didn't degrade and was still so viscous. Conventional gels are mainly made of water and can't be used for a long time, so we decided to use this material for research."

Led by Svetlana Chechetka, the team buttered up ants with the tacky sludge before releasing them into a box of tulips. The ants with the gel collected more pollen on their bodies.

The next step to robo-bees required a flying object, so the team bought a tiny $100 drone with four propellers and placed a strip of coarse bristles to mimic the fuzziness of bee hairs. 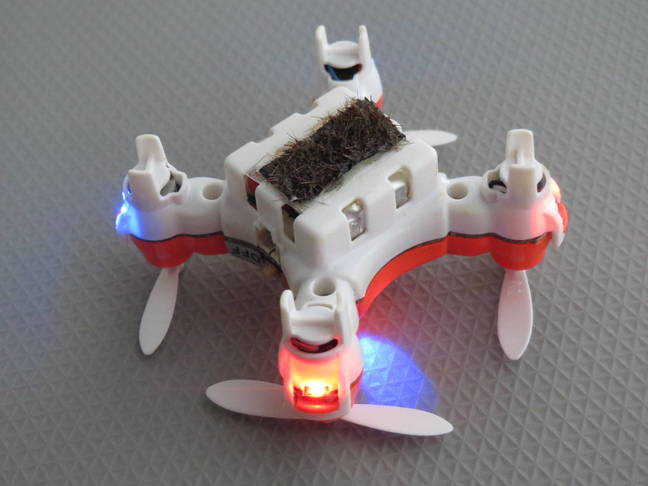 Next, the team flew the UAV so it skimmed the flower's surface. The fibre strip absorbed the pollen, which could then be deposited on to the next flower, kickstarting artificial pollination.

"The findings, which will have applications for agriculture and robotics, among others, could lead to the development of artificial pollinators and help counter the problems caused by declining honeybee populations," Miyako concluded. "We believe that robotic pollinators could be trained to learn pollination paths using global positioning systems and artificial intelligence."

It may sound like science fiction, but teams at Harvard University are developing autonomous robo-bees, and the University of Bristol is tackling swarm robotics ®.